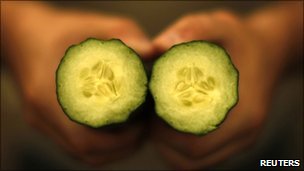 Suspicion has fallen on cucumbers from Spain


Germans have been warned not to eat cucumbers until tests identify the source of a deadly E.coli outbreak which local officials say has killed 13 people.
It is thought contaminated cucumbers were imported from Spain, but further tests are being carried out.
Germany has registered 1,200 confirmed or suspected E.coli cases so far.
With cases reported in Sweden, Denmark, the Netherlands and the UK, Germany is set to hold crisis talks later.
In many of the reported cases, the gastrointestinal infection has led to Hemolytic-uremic Syndrome (HUS), which causes kidney problems and is potentially fatal.
Export chain One woman was taken to hospital in Poland on Monday. She was said to be in a serious condition after returning from a trip to the northern German city of Hamburg, which has seen the majority of infections.
Authorities in the Czech Republic, Austria and France have taken some Spanish-grown cucumbers off shop shelves amid contamination fears.
Czech officials said contaminated cucumbers may also have been exported to Hungary and Luxembourg.
Suspicion has fallen on organic cucumbers from Spain imported by Germany but then re-exported to other European countries, or exported directly by Spain.
Austria has banned the sale of cucumbers, tomatoes and aubergines imported via Germany, while Russia has banned the import of some vegetables from Germany and Spain.
"If the situation does not change, then we will ban all European vegetable products," Gennady Onishchenko, the head of Russia's consumer protection agency, was quoted as saying by Interfax.
Two Spanish greenhouses identified as sources for the outbreak have been closed and are currently under investigation to see whether the outbreak originated there or elsewhere, said an EU spokesman.
Spanish officials have said Europe should not be so quick to blame Spanish produce, and said they would seek a response from the EU for damages incurred by the claim.
"You can't attribute the origin of this sickness to Spain," said Diego Lopez Garrido, Spain's Secretary of State for European Affairs.
"There is no proof and that's why we are going to demand accountability from those who have blamed Spain for this matter," he told reporters in Brussels.
Contagious cucumbers? The Sweden-based European Centre for Disease Prevention and Control has called the outbreak "one of the largest described of HUS worldwide and the largest ever reported in Germany".
Twelve of the outbreak's 13 fatalities have been women. All but one of those deaths were recorded in northern Germany, but fears that the outbreak was spreading increased when a 91-year-old woman died in the western state of North Rhine-Westphalia.

Continue reading the main story
The head of Hamburg University's Eppendorf Clinic, Joerg Debatin, said more deaths were expected, as 30 people infected with HUS had lost kidney function.
German authorities have warned the outbreak may get worse as its source may still be active.
As German media reported the number of people infected had risen to 1,200, Health Minister Daniel Bahr was preparing to hold emergency talks with Consumer Affairs Minister Ilse Aigner and regional state representatives to discuss the outbreak, officials said.
Meanwhile, the authorities in Schleswig-Holstein and Lower Saxony expect the number of seriously ill patients to rise, because it can take up to 10 days for symptoms of infection to appear, the news website Spiegel reported.
Doctors are pinning their hopes on Eculizumab, an antibody treatment that has worked in the past against HUS, correspondents say.
The head of the Robert Koch Institute (RKI), Germany's national disease institute, has warned people to avoid eating raw cucumbers, tomatoes and lettuce.
But RKI President Reinhard Burger said the source of the contamination had not yet been clearly identified, AFP reported.
The outbreak has baffled scientists because whereas HUS normally affects children under the age of five, in this instance nearly 90% are adults and two-thirds are women, says the BBC's Stephen Evans in Berlin.
One possibility is that they became infected after eating food for what they thought were health reasons, adds our correspondent.
The DNA of the bacterium is to be analysed later to try to find ways of catching it early in people infected by it.
The sickness is not directly contagious but it can be transferred between people if an infected person prepares food for others.