Teaching the world, online from India 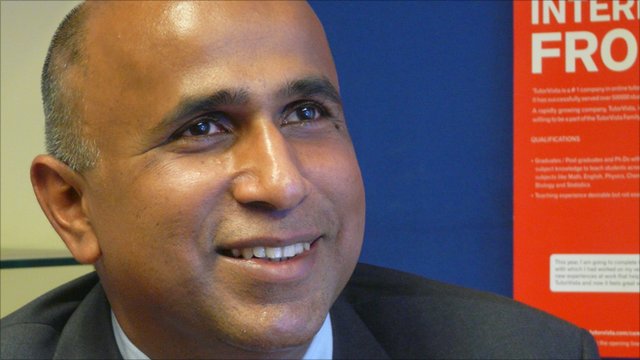 Click to play
When Krishnan Ganesh mentors young entrepreneurs he encourages them to think they have nothing to lose
Serial entrepreneur Krishnan Ganesh believes there are two things that starting up a successful business requires, passion for an idea and stupidity.
"You need to have the stupidity to believe that that idea will work because, right off the block, you're starting with a 5% probability of success," he says.
This confidence has characterised his latest venture. The engineering graduate confesses he started up his fourth business, TutorVista - an online tutoring service based in India - although he had no experience of the education sector.
Despite this, the company has seen strong growth since it launched in 2006.
"Our youngest is a six-year-old student from the US and the oldest is a 64-year-old man from Korea who comes to learn English," says Mr Ganesh.
He adds that TutorVista now provides remote tutoring via the web to as many as 2,000 college and school students in the US alone.
The media and education giant Pearson acquired a controlling stake in the business in early 2011.
Reaching higher Krishnan Ganesh says he got the idea for his latest company when he travelled around the United States.
"In India we see the US as the ultimate in higher education. It produces the maximum number of Nobel Laureates in the world, it files the maximum number of patents in the world and arguably it has… the best institutes in the world." 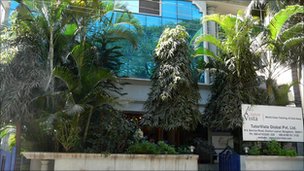 Most tutors work from home, only some are based at TutorVista's headquarters in Bangalore
Mr Ganesh was shocked by "the amount of media debate over the crisis in the US school education system". His curiosity was piqued and he decided to research the question further.
"When I went deeper, I found that while the public school system is good, the teachers are good… [but] personalised education… is simply unaffordable. It costs anything between $40 to $60 per hour."
The entrepreneur was inspired to try to create something more cost-effective.
He came up with the idea of using the internet to connect students in countries like the US or Britain, with teachers from countries like India, where wages are lower.
The aim was to create a low-cost service "which becomes part of the monthly budget of a US family".
Krishnan Ganesh says his enterprise has been enabled by recent technological developments, such as better internet connectivity and the widespread growth of personal computers.
"That really was one important element… I couldn't have done this 10 years back."
Remote model Mr Ganesh believes that using the internet as the backbone of your business offers lots of different ways to cut costs and streamline processes.
Lower labour costs are not the only factor in helping to keep the price of the service down.
Mr Ganesh says that another important element lies in mostly employing teachers who work from home - something only now possible because of good internet connections: "The remote model helps us a lot in keeping the capital expenditure and running expenditure down." 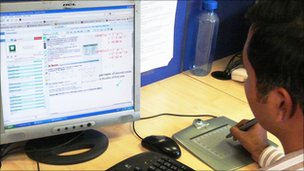 Remote working is the backbone of the business, even tutor recruitment is done entirely online
The company does not do conventional advertising, preferring instead to market direct to the consumer through online search results on the web.
"When a student or a parent from the US searches for help with algebra or help with English, our Google ads come on the top," explains Mr Ganesh.
It's only when consumers have clicked onto the website that they then can chat to the sales team about the service before deciding whether to subscribe.
"There is no business promotion," says the entrepreneur. "Everybody comes to our site and we sit in our office and sell to them."
This remote way of working which characterises TutorVista's teaching service and their marketing strategy is also used to find and train their tutors.
"The entire recruitment is done online completely; right from the interview to selection, to training, to certification," says Krishnan Ganesh.
"We believe if we can teach students thousands of miles away, we can definitely train our teachers in India."
Challenges and concerns Concerns have been expressed in several countries about the potential downsides of the so-called "offshoring" of educational services.

The fear of failure is extremely strong in India, and that's one of the reasons that deters entrepreneurial ideas coming up”

Krishnan Ganesh Founder, TutorVista
Continue reading the main story
Worries include whether teachers' jobs will be at risk, and whether there will be a decline in standards if more teaching is done online, and less face to face.
In response, Mr Ganesh says he does not believe what his firm is doing as a threat to the jobs of teachers elsewhere.
He says he would like the service to be seen as a support to what is already happening in the classroom, not as a challenge to it.
"The need for interaction, the culture, the values that a teacher teaches, all of it is unquestioned. We are not replacing any of it."
Any web-based service dealing with children is faced with the issue of how to protect them online. Mr Ganesh says this is a concern that requires constant vigilance.
The company says it has various privacy features in place. To preserve anonymity, webcams are not used.
Background checks are carried out on all teachers. The company also records all its teaching sessions as well as "random drop-in monitoring" of the classes in real time.
"We do it more for quality purposes," explains Mr Ganesh. "But the teachers know that at any point of time they can be monitored."
Fear of failure Krishnan Ganesh confesses he's thrilled by the prospect of starting new ventures - but he adds that India can be a daunting place in which to start a business.
"The fear of failure is extremely strong in India, and that's one of the reasons that deters entrepreneurial ideas coming up," he says.

He believes it's a cultural perception rather than the financial pressures which inhibit people.
"The society, the neighbours, the family - especially the in-laws - look at failure with a jaundiced eye, and it creates pressure on people either not to start, or start slower, more conservative businesses," he explains.
Now the entrepreneur encourages others not to be afraid.
"When I mentor young people, especially highly-qualified people, I tell them you have nothing to lose. If it doesn't work after two years, you will get a job that pays you a good salary."
Still, Mr Ganesh reckons many more successes and failures are needed before it becomes acceptable for entrepreneurs to have tried and failed than not to have tried at all.
"Hopefully it will change over the next 10, 20 years," he says.
"Silicon Valley is a very great contrast and a lovely example where it's almost a matter of pride that you started a business and you shut it down."

Posted by Terrobuster at 9:06 PM