Are thin women the enemy? 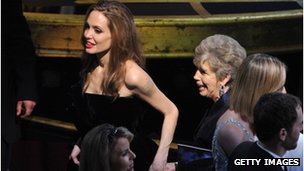 At the Oscars, Angelina Jolie came under fire for her thin frame
From super-skinny celebrities to models with low BMI, people are speaking out about women they perceive to be too thin. But some experts worry this behaviour makes things worse.
This week, Israel passed a law banning models from advertisements or fashion shows if they measure less than 18.5 on the body mass index (BMI). It's part of an effort to promote health for women of all sizes, and to stop glorifying the ultra-thin.
"Beautiful is not underweight," says Rachel Adato, one of the creators of the bill.
In recent years, much attention has been paid to how women are portrayed in the media, whether it's an overly airbrushed magazine model with an impossibly slim waist, or a TV starlet with protruding collar bones.
In an era when pro-anorexia communities congregate on social media sites like Pinterest, it's no wonder that lawmakers are concerned with women's body image.
For sure, reducing the number of images that portray women as very thin is beneficial, says Claire Mysko, director of Proud2BeMe, a website created with the National Eating Disorders Association (Neda) to promote healthy body image.
"There is a danger in being constantly exposed to one image of beauty," she says. "There is a serious lack of body diversity in the media. People are not seeing themselves and their bodies reflected."
Israel's law may be the catalyst needed to help make change. But others say it could make things worse.
'Arbitrary' system Many magazine editors, modelling agents and casting directors say they want to use more diverse models, but can't because of industry expectations - with each blaming the other group for setting the tone.
"They all feel trapped into producing what nobody individually espouses," says Amanda Mears, author of Pricing Beauty: The Making of a Fashion Model. "Everyone felt individually powerless."
Regulating the types of models that can be used may be a good way to "shock" the system into making changes, she says.
However, she, along with many other experts on eating disorders and body image, worry that the law is flawed.
"Bodies come in different shapes and sizes, and the very idea that there is a concrete qualifying number, and if someone can match it they're considered healthy, is wrong," she says.

BMI, a ratio of height to weight, is best used as a way to measure the average size of groups of people, but is not a good indicator of personal health, says Margo Maine, a clinical psychologist who has specialised in eating disorders.
"It's arbitrary," she says.
"In the past I would have welcomed [the law] but I am a little leery of the judgment about the correct body type."
Limiting the types of bodies that are permitted to model or considered attractive can backfire, says Matthew Johnson, director of education at the Media Awareness Network, a media education programme in Canada.
"What would be more effective would be encouraging a wider variety of body shapes on TV and in media in general."
Otherwise, the message is not to celebrate bodies of all shapes and sizes, but to reject extreme thinness.
Toxic effect "We have reduced women to their size," says Dr Maine, author of the The Body Myth.
"By targeting women who are thin, whether they have an eating disorder or are naturally thin, we are focusing on the individual instead of challenging the culture that buys into it."

Thin women may have an easier go of it than fat women, but they're still subject to attacks about their size. Catherine, the Duchess of Cambridge, is subjected to constant speculation about her health and comments about her weight.
Angelina Jolie's Oscar appearance last month set Twitter alight with criticisms of her thin frame. "Angelina Jolie looks like her arms are ready to snap in half at any moment. Gross," wrote one user.
Speaking out against very thin star celebrities can feel like a satisfying blow against unrealistic body standards, says Raegan Chastain.
As an advocate for fat acceptance she has often heard people criticise women for being too thin.
Still, she warns those trying to come to terms with their own size to leave other people out of it.
"If you want to push against standards, you don't do that by bashing people," she says.
"You can't look at someone and tell how healthy they are. Weight and health are two separate things."
With that in mind, Neda has advocated that models be screened for eating disorders, but not that they be prohibited from working based on a size and weight limit.
They've also launched Proud2BeMe, an extension of a Dutch website designed as a safe space to discuss body issues and health concerns.
"There are people who are naturally thin and people who are naturally heavier, and we need to accept a diversity," Ms Mysko says.
"That's the goal: not to define one body type as attractive and another type as unattractive." 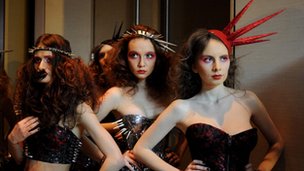 What about air brushing?

The Israeli law also requires air brushing to be disclosed, similar to laws in the UK, Spain and Italy. "That's something I can appreciate," says Eric Stice, a scientist at the Oregon Research Institute. "There are a lot of women busting their butt to look like an image that nobody really looks like. Not even the models look like they're portrayed in the magazine."
More disclosure about altered images can also help facilitate conversations with children, which can help build better media savvy, says Matthew Johnson, director of the Media Awareness Network. "Knowing it is manipulated is not enough," says Mr Johnson. "Young people need to have critical thinking skills."

Posted by Terrobuster at 8:45 PM