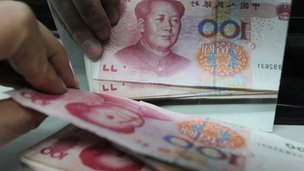 Japan, China and South Korea have moved closer to signing a trilateral investment agreement that could pave the way for a free-trade deal.
If signed it would be the first economic agreement that is backed by law between three of Asia's largest economies.
The countries have been working on an agreement since 2008.
Many Asian nations have been trying to improve ties as growth has slowed in markets such as the US and Europe.
Japan's Ministry of Economy, Trade and Industry said the three countries agreed to the terms of the investment pact at a meeting in Beijing earlier this week.
The ministry did not provide details on the agreement but it is expected to protect the intellectual property rights of Japanese and South Korean companies currently running businesses in China.

Posted by Terrobuster at 8:47 PM