(AFP) – 1 day ago
MOGADISHU — Somalia's national theatre reopened in the war-ravaged capital Mogadishu for the first time in 20 years Monday with the president voicing hope it would mark a watershed in the long quest for peace.
"Somalia has historic literary traditions that date back more 700 years... and I feel that resuming such traditions will play a role in the peace process," President Sharif Sheik Ahmed said in a speech at the open-air Chinese-built theatre.
The fragile Western-backed government, which is waging an uphill battle against Islamist Shebab militants in the Horn of Africa nation, claimed it was a sign that things were slowly improving in the pockmarked seaside capital.
"We are here and watching performances for the first time in many years today because of the stability we have in Mogadishu and this is because of the sacrifice made by the national armed forces," Prime Minister Abduweli Mohamed Ali said at the opening ceremony.
But he added with a tinge of nostalgia: "I used to come at this theatre during the halcyon days when it looked better than today, I wish the good look of the theatre will be resumed."
The hardline Shebab have resorted to guerrilla tactics after the majority of fighters abandoned fixed bases in Mogadishu in August in what the Islamists claimed was a tactical retreat but the African Union peacekeeping mission said represented a military defeat.
The Shehab last month also lost control of their strategic base of Baidoa to Ethiopian troops and pro-government Somali forces, the second major loss in six months.
The Shebab and other militia groups have tried to exploit the power vacuum in Somalia, which has had no effective central authority since plunging into war 21 years ago when president Mohamed Siad Barre was toppled.
The highlight of the programme was a drama about good parenting.
"The reopening of the theatre after 20 years represents a major move towards the establishment of entertainment... people need life and fun not just violence forever," said Abdirsak Ali, who attended the ceremony.
"The future looks bright now, Somali literary traditions were about the fade completely but now that the theatre was reopened, people will at least have somewhere to go for entertainment," said Adan Mohamed, another theatre-goer.
Fadumo Moalim, a mother of three, however voiced concerns about safety, citing the Shebab's opposition to forms of entertainment it claims are proscribed in Islam.
The Shebab "target cinemas and football matches so that do you think they will spare a theatre where hundreds of people watch performances. I think this is not the suitable time to bring people in numbers at a place like the national theatre."
Ismail Yasin, who lives near the complex, echoed her comments.
"Security is the prime subject here. If the government can ensure security the idea to reopen the national theatre is good, otherwise the place could turn into a suicide bomber's target.
Kenya sent its troops into southern Somalia to fight them last October blaming the Shebab for the abductions of several foreigners.
Ethiopian forces entered Somalia a month later, entering the west of the country.
Analysts have nevertheless warned that the Shebab remain a major threat in the Horn of Africa nation. 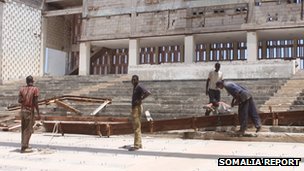 T
he Somali National Theatre closed in the early 1990s when civil war broke out
19 March 2012 Last updated at 19:05 GMT
Somalia's national theatre has reopened in Mogadishu, more than 20 years after it last shut its doors.
The event was marked with the showing of a local play, traditional music and comedy performances for an audience of around 1,000 people.
The theatre closed in the early 1990s as Somalia descended into civil war and the capital became a no-go area.
The UN-backed government is trying to re-establish control of the city after al-Shabab's Islamists were forced out.
The al-Qaeda-linked group banned all forms of public entertainment, such as the theatre.
'Beauty of Somalia' Jabril Ibrahim Abdulle, director of a Somali think tank, said the theatre's history reflected that of Somalis.
Mr Abdulle, who was one of the driving forces behind the opening of the theatre, told the BBC's Focus on Africa programme: "The theatre was absolutely devastated daily and that really mirrored the life of Somalis.
"We all killed each other enough - life has to move on, 21 years [of war] is enough," he said.
"People are saying if we can rebuild the theatre, we can rebuild our lives."
The opening shows at the Somali National Theatre will address issues of peace and reconciliation and look at what happened to the country over the last two decades.
In a sign of how far the country still has to go to achieve lasting peace, around six people died when a mortar shell fired by al-Shabab fell on a refugee camp in Mogadishu on Sunday night just a few hundreds metres (yards) from the theatre.
"People are brave enough to show up and enjoy themselves, despite the attacks yesterday, and that is the beauty of Somalia," Mr Abdulle said.
Somalia's President Sheikh Sharif Sheikh Ahmed has assured performers that the national theatre is an important part of attempts to revive the country's institutions and will remain fully functioning.