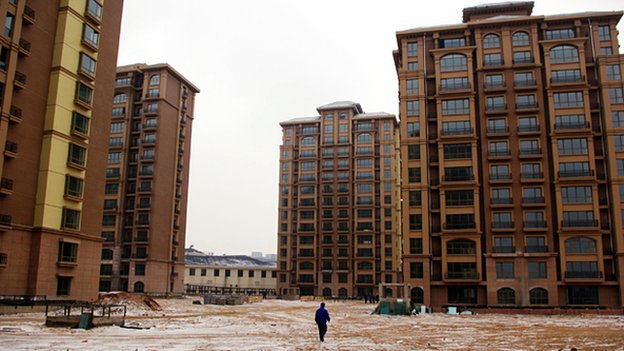 In Inner Mongolia a new city stands largely empty. This city, Ordos, suggests that the great Chinese building boom, which did so much to fuel the country's astonishing economic growth, is over. Is a bubble about to burst?
A huge statue of the mighty warrior Genghis Khan presides over Genghis Khan Plaza in Ordos New Town. The square is vast, fading into the snowy mist on a recent Sunday morning.
Genghis Khan Plaza is flanked by huge and imposing buildings.
Two giant horses from the steppes rise on their hind legs in the centre of the Plaza, statues which dwarf the great Khan himself.
Only one element is missing from this vast ensemble - people.
There are only two or three of us in this immense townscape. Because this is Ordos, a place that has been called the largest ghost town in China.
Most of the new town buildings are empty or unfinished. The rampant apartment blocks are full of unsold flats.

It is a spectacular example of a new Chinese phenomenon, in many cities - unsold flats, unlet shops, empty office blocks”

If you want to find a place where China's huge housing bubble has already burst, then Ordos is the place to come.
The story started about 20 years ago, with the beginning of a great Mongolian coal rush.
Private mining companies poured into the green Inner Mongolian steppe lands, pock-marking the landscape with enormous opencast holes in the ground, or tunnelling underground.
Local farmers sold their land to the miners, and became instantly rich. Jobs burgeoned. Ceaseless coal truck convoys tore up the roads.
And the old city of Ordos flourished as the money flowed in.
The municipality decided to think big, too.
It laid out plans for a huge new town for hundreds of thousands of residents, with Genghis Khan Plaza at the centre of it.

Ten years later Ordos new town is an empty new city.
And it is merely the most spectacular example of a new Chinese phenomenon, in many cities - unsold flats, unlet shops, empty office blocks.
It looks to outsiders as though the great Chinese building boom is over, the real estate extravaganza that shook the world.
Western financial experts who fear a bursting of the Chinese real estate bubble point out that the Chinese economy is more dependent on house building than the United States economy was, before the sub-prime lending bubble burst in 2007.
Many Chinese local authorities seem to have become dependent on the proceeds of big land sales to developers.
In the eyes of the critics, China's housing boom is becoming a disaster.
Well, the authorities in Beijing have taken notice of the direst warnings. They have been taking official action to rein in the speculative buying of multiple apartments over the past two years.
Chinese economic commentators seem much less concerned than the Western doom-mongers. They are still confident that the technocrats in Beijing who have guided China's 30 years of spectacular economic growth will soon be able to balance supply and demand in the housing market. 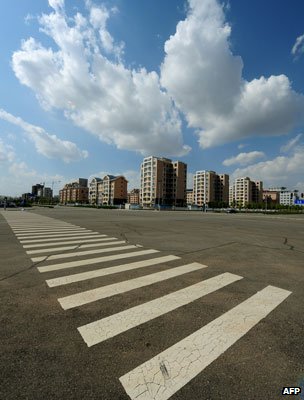 Many ordinary people who invested in property, have lost money
The same relaxed attitude was apparent in a couple I met in a spacious apartment in Ordos, in the middle of a building site.
They were buying the place as an investment, even though the delivery date keeps on slipping.
It is, of course, only some 25 years since Chinese people were permitted to buy and sell homes at all.
Decades of pent-up demand are still being satisfied as the great wheel of Chinese urbanisation continues to bring millions of people in from the countryside to work in the cities.
Right now there are other worries in the Chinese system, typified by Mr Li, a man I met in Ordos, who had prospered when the local council bought up the land on which his family's shop had been located.
He invested the compensation with local private financiers.
It is common practice in China where there is a big grey market in private loans to private businesses who cannot get money from the big, official, state-owned banks.
Mr Li's private financier naturally invested the money in property, and paid him interest every three months at the rate of about 40% a year.
Mr Li had put the equivalent of over $1m (just over £600,000) into such schemes.
For two years they paid out, but last year the interest payments began to dry up.
Then one of the financiers disappeared.
This has become a very familiar story in China now, one that is making big headlines as some famously rich private finance people come up for trial on charge of huge financial irregularity. China's 68th richest woman, Wu Ying, is facing the death penalty for schemes she ran in her 20s.
At least half of Mr Li's money now seems to have disappeared.
As a Mongolian, he told me he was very angry when it happened last year. But now his mood has changed to a curious, fatalistic resignation, quite unlike Genghis Khan.
"Once we were rich, and now we're poor again," said Mr Li, with something like a wry grin.


From Our Own Correspondent

Posted by Terrobuster at 1:39 AM