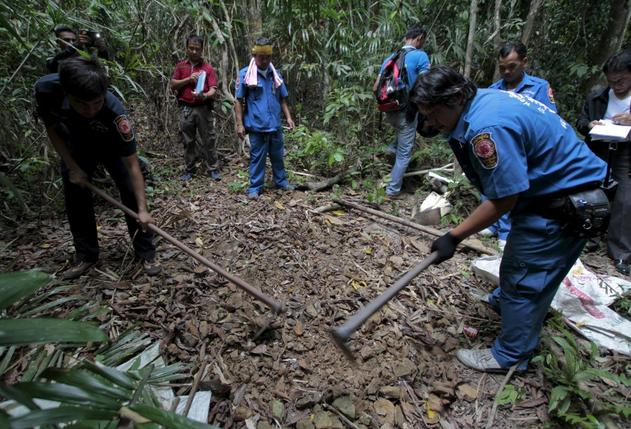 Security forces and rescue workers inspect a mass grave at a rubber plantation near a mountain in Thailand's southern Songkhla province May 7, 2015.
Reuters/Surapan Boonthanom
More than 50 Thai police officers have been punished over suspected links to human trafficking networks, the country's police chief said on Thursday, after the prime minister ordered a probe into the discovery of trafficking camps near the Malaysian border. Thirty-three bodies, believed to be migrants from Myanmar and Bangladesh, have been found in shallow graves over the past week in the southern province of Songkhla. Some of the bodies were found at a suspected human trafficking camp hidden deep in the jungle.
"We have transferred over 50 police officers over this issue because commanders in local areas know who has been involved in what," Chief of Royal Thai Police General Somyot Poompanmuang told reporters ahead of a meeting in Bangkok to discuss efforts to crack down on the illicit trade.
"In the past there were no sincere efforts to solve this problem. This is only something that has happened recently."
Some Thai officials say human trafficking has been allowed to flourish for years amid indifference and, sometimes, complicity by Thai authorities.
Thai army rangers found another abandoned camp on Thursday, according to a Reuters reporter at the scene, around 5 kilometers from a camp discovered on Wednesday where six bodies were dug up.
A man's body in a shallow grave was found around 300 metres from the camp uncovered on Thursday.
Thai Prime Minister Prayuth Chan-ocha has ordered a clean up of suspected human trafficking camps around the country within 10 days, while U.N. officials have called for a regional effort to end the illicit trade.
Thailand was not to blame for the crisis, said Prayuth.
"This problem comes from abroad and not from us. To solve it we must look to the source because we are merely a transit country," he said.
Thousands of illegal migrants, including Rohinghya Muslims from western Myanmar and from Bangladesh, brave dangerous journeys by sea and land to escape religious and ethnic persecution and in search of work abroad.
They are often trafficked through Thailand, a predominantly Buddhist country, and taken into the country's jungles, where traffickers demand ransoms to release them or smuggle them across the border to mainly Muslim Malaysia.
Sunai Phasuk of Human Rights Watch told Reuters that the latest crackdown was the "first effort by the Thai government to leave no stone unturned" and called for an investigation of military personnel suspected of involvement in human trafficking.
"We see local politicians and police being investigated and named but what about military personnel? What about officials from forestry departments which have long been alleged to have provided support to human traffickers?"
Thai police have arrested four men - three Thais and a Myanmar national - on suspicion of human trafficking. Arrest warrants have been issued for a further 14 people, police said on Thursday.
(Additional reporting by Pracha Hariraksapitak in BANGKOK and Surapan Boonthanom in PADANG BESAR; Writing by Amy Sawitta Lefevre; Editing by Jeremy Laurence and Rachel Armstrong)
Posted by Terrobuster at 2:21 AM