‘Pork or nothing’: Mayor makes Muslim kids to go meatless at French school 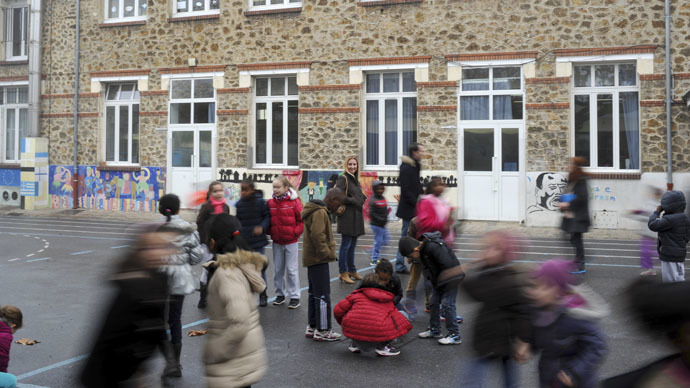 AFP Photo/Stephane De Sakutin
Tags
France, Human rights, Religion, Scandal
A secularism scandal is raging in France, after a mayor in a northwestern town introduced a “pork or nothing” principle at school, even for 27 students who will get no meat substitute.
The rule will apply starting from January 1 in the town of Sargé-lès-Le Mans, and may apply to Jewish pupils as well – though there aren’t any in this particular school.
Mayor Marcel Mortreau bases his decision on the “principle of Republican neutrality.”
“The mayor is not required to provide meals that respond to religious requirements. This is the principle of secularism,” Mortreau told Europe1 radio.
The move was backed up by the Town Hall on the grounds that the food providers face extra work if they have to deliver meat substitutes, the Local reported.
The initiative has been supported by some public school officials.
"We didn’t open school canteens for partisan, religious, philosophical, cultural reasons," said Eric Le Moal, director of a public school in Lezignan-Corbieres in the Aude, which also passed the one-dish policy last year.
Muslim parents and pupils expressed their fury at the mayor’s decision, especially due to the fact that a second meal doesn’t cost any extra.
“Eating two starters is not the same as eating a meat dish. Meat is something the body needs to work and to think. I need meat, it’s important,” a pupil, Tarik, told Europe1 radio.
Tarik’s mother Yasmine called the new policy “discrimination” and voiced her anger that she has to tell “a small child that “you will eat less today because there’s pork on the menu.”
“You hear comments like, ‘if you don’t like it, take your children home.’ It hurts,” she added.
The parents and kids were supported by officials, for instance, Paris Mayor Jean Tiberi said that the move aims to “stigmatize Muslims.”