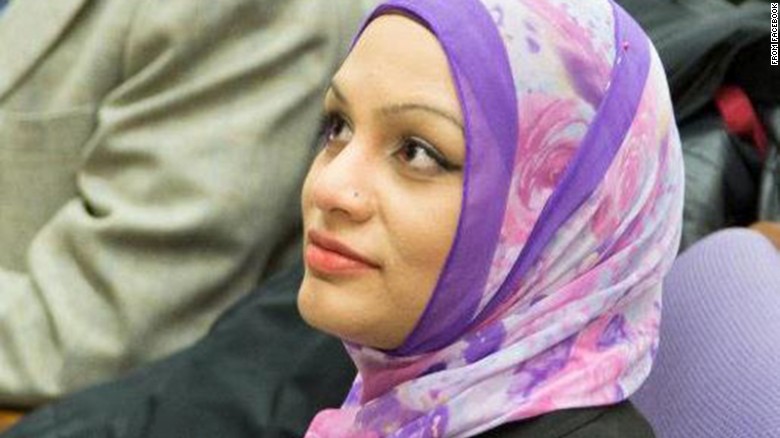 Tahera Ahmad, who is Muslim, said she was discriminated against on a United Airlines flight. (Facebook profile picture)

(CNN)A simple request for an unopened can of Diet Coke on a United Airlines flight left Tahera Ahmad in tears.
A Muslim chaplain and director of interfaith engagement at Northwestern University, Ahmad, 31, was traveling Friday from Chicago to Washington for a conference promoting dialogue between Israeli and Palestinian youth. She was wearing a headscarf, or hijab.
For hygienic reasons, she asked for an unopened can of soda, she said. The flight attendant told her that she could not give her one but then handed an unopened can of beer to a man seated nearby. Ahmad questioned the flight attendant.
"We are unauthorized to give unopened cans to people because they may use it as a weapon on the plane," she recalled the flight attendant telling her.
When Ahmad told the flight attendant she was being discriminated against, the attendant abruptly opened the beer can.
"It's so you don't use it as a weapon," Ahmad said she was told.
Shocked, Ahmad asked other passengers if they had seen what happened.
A man sitting across the aisle turned to her and yelled, "You Muslim, you need to shut the f--- up," she said.
"What?"
The man leaned over, looked her in the eyes and said: "Yes, you know you would use it as a weapon. So shut the f--- up," according to Ahmad.
"I felt the hate in his voice and his raging eyes," Ahmad wrote on Facebook while the plane was still in flight. "I can't help but cry ... because I thought people would defend me and say something. Some people just shook their heads in dismay."
After her Facebook post, people took to social media in support of Ahmad using the #unitedfortahera hashtag. Some pledged to boycott United.
Suhaib Webb, a prominent Muslim American imam, tweeted, "I'm asking all of you to let @united know that you are disgusted with this bigotry." He also tweeted a photo of a can of Diet Coke over #unitedfortahera.
In a statement, United spokesman Charles Hobart said the airline "strongly supports diversity and inclusion."
"We and our partners do not discriminate against our employees or customers," the statement said. "We are reaching out directly to Ms. Ahmad to get a better understanding of what occurred during the flight."
"We are also discussing the matter that Ms. Ahmad describes with Shuttle America, our regional partner that operated the flight. We look forward to speaking with Ms. Ahmad and hope to have the opportunity to welcome her back."
Ahmad, who has Premier frequent-flier status with United, said Saturday that she had not heard from the airline.
"I'm not doing this to go after United Airlines. This is about bigotry and racism and our country is going through a very difficult time right now. Dr. Martin Luther King Jr. and so many others worked so hard ..." Ahmad said, breaking into tears.
"They strove so hard so that Americans would not mistreat each other on the basis of the color of their skin or religious or ethnic background but I guess we're still on that journey."
The flight attendant as well as the pilot later apologized, she said.
"She said she's working on her rude behavior and that the man (sitting across the aisle) should not have said anything," Ahmad recalled.
Ahmad was recognized at the White House last year "as a leading Muslim female in the United States" during Women's History Month, according to Northwestern University. She had previously attended a Ramadan dinner hosted by President Barack Obama.
In 2013, Ahmad sparked outrage among Islamic conservatives when she became the first woman to recite the Quran at the Islamic Society of North America convention in Washington, the nation's largest Muslim gathering, according to Northwestern.
Ahmad was born in India and grew up in Morton Grove, Illinois. She said she has been spat on and had her hijab ripped off in Islamophobic encounters after the September 11, 2001 terror attacks.
"This time I was being treated as a threat to everyone around me 30,000 feet above the ground and being told that I could use a can of Diet Coke as a weapon," she said. "And no one said anything."
The incident comes amid growing hostility toward Muslims living in the United States.
On Friday, protesters at a "Freedom of Speech" rally outside a Arizona mosque were met by counterprotesters. The two groups lined opposite sides of the street in front of the Islamic Community Center of Phoenix. They yelled at each other as a line of police officers kept them apart, CNN affiliate KNXV reported.
The Islamic center is the mosque once attended by Elton Simpson and Nadir Soofi, who drove from Arizona to a Dallas suburb to shoot up a Prophet Mohammed cartoon contest there. Both were killed by police early this month. Many Muslims consider demeaning depictions of Mohammed to be blasphemous and banned by Islamic law.
In Washington, activist and conservative blogger Pamela Geller of New York wanted to place ads showing cartoons of Mohammed in the capital's transit system. She hoped to display the winning cartoon from her group's contest in Texas -- the one where Simpson and Soofi were killed by police. The Washington Metro board voted to stop showing issue-oriented ads throughout its system.
Events such as this have some Muslims scared, said Imraan Siddiqi with the Council on American-Islamic Relations.
"Recently, the mosques here in Phoenix actually received threatening letters -- very specific threats, saying that we are going to massacre your congregations," he said.
In a national survey by the Pew Research Center in 2013, 42% of respondents said Islam was more likely than other religions to encourage violence among its believers. In addition, Muslim Americans are seen as facing more discrimination than other groups, including gays and lesbians, Hispanics, African Americans and women.
According to the survey, 45% of the respondents said Muslim Americans face "a lot" of discrimination, and 28% said Muslims are subject to some discrimination.
CNN's Carma Hassan, Sara Sidner, Ed Payne contributed to this story.