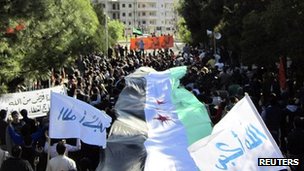 Protests continued on Sunday in Homs
French Foreign Minister Alain Juppe has said time is running out for the Syrian leader after the Arab League agreed sanctions against Damascus over its crackdown on pro-democracy protests.
The league approved unprecedented sanctions on Sunday, including an asset freeze and an embargo on investments.
The Syrian foreign minister is due to hold a news conference later.
The UN says at least 3,500 people have died in the crackdown on protests which have been going since March.
The government of President Bashar al-Assad blames the violence on armed gangs and militants.
Mr Juppe told French radio the days of the Syrian government were "numbered" as it was "totally isolated".
"Things are going slowly unfortunately... but they are advancing since the Arab League, which carries considerable political weight, has just decided on some sanctions which will isolate the Syrian regime a bit more," Mr Juppe said.
Earlier this month, the Arab League suspended Syria in a move denounced by Damascus as meddling in its affairs.
The league's sanctions came after Syria refused to allow 500 Arab League monitors into the country to assess the situation on the ground.
Syria, one of the founder members of the Arab League, condemned the sanctions as a betrayal of Arab solidarity.
The EU and the US already have sanctions in place against Syria.
Meanwhile, violence continued on Sunday with Syrian activists saying at least 11 people were killed across the country.
The flashpoint region of Homs saw at least six people killed in three separate incidents, the British-based Syrian Observatory for Human Rights said.
Reports from Syria are difficult to verify as foreign journalists are unable to move around the country freely.

Posted by Terrobuster at 3:23 AM