Nestle 'to act over child labour in cocoa industry' 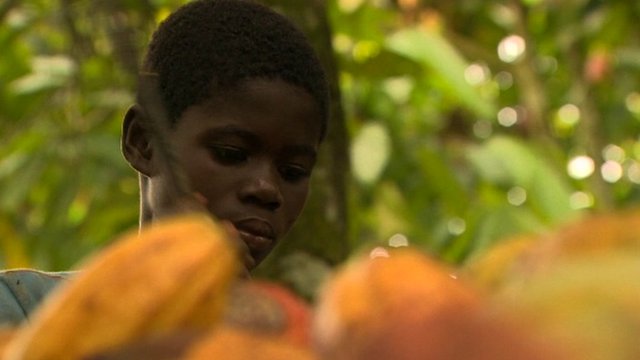 Children have to use machetes for their work on the cocoa plantations
Global food giant Nestle says it has taken a major step to end child labour on cocoa farms supplying its factories.
The firm, one of the world's largest chocolate producers, says it is going to work with the Fair Labor Association (FLA) on tackling the problem.
The FLA is set to examine Nestle's cocoa supply chains in Ivory Coast in January, the firm said in a statement.
Critics ask why it has taken Nestle so long to act if it knew children were involved in its cocoa production.
Nestle and the world's other biggest chocolate producers signed a cocoa protocol - an international commitment to end child labour in the cocoa industry - 10 years ago.

Earlier this year, a report commissioned by the US government found that the chocolate industry's funding since 2001 had "not been sufficient" and it needed to do more.
Nestle, in its statement, said the "cocoa supply chain is long and complex" - making it "difficult for food companies to establish exactly where their cocoa comes from and under what conditions it was harvested".
The firm said the FLA would send a team of independent examiners to Ivory Coast - where Nestle buys most of its cocoa - to map the supply chain.
The results of its assessment will be published next year and will guide future operations there, the firm said.
"Child labour has no place in our supply chain," said senior Nestle executive Jose Lopez.
"We cannot solve the problem on our own, but by working with a partner like the FLA we can make sure our efforts to address it are targeted where they are needed most".
'Moral obligation' The US government-backed report by Tulane University, published in March, found that more than 1.8 million children in West Africa were involved in growing cocoa.
Earlier this month, the BBC's Humphrey Hawksley travelled to Ivory Coast and found children using machetes to hack open cocoa pods to extract the beans.
One boy told him that he had been sent by his father to the farm to work, and had not seen his family for three years.
Gilbert Kone Kafana, Ivory Coast's minister for labour and social affairs, said there was a "moral obligation" on chocolate companies to help rebuild the country ravaged by years of civil war.
"We need to build roads, schools, hospitals and social centres; anything that would allow Ivory Coast to progress," he told the BBC.
"This development is necessary for farmers to have a good life, and it is in the interest of the industry to work with us."

Humphrey Hawksley BBC News
During my visit to Ivory Coast earlier this month, it was easy to find child labour and difficult to see substantive measures to prevent it.
The sight of children carrying machetes or pesticide equipment is common throughout the country's cocoa belt.
More than 800,000 children there are believed to do some form of cocoa-related work.
I found a group walking along a muddy path towards trees where bright yellow cocoa pods hung ready for harvest.
Silently, the children squatted down and started work. They wore torn and grubby shorts and T-shirts. There was no laughter or play.
On their legs were scars from machete injuries. There was no first-aid kit around or any protective clothing.

Posted by Terrobuster at 3:33 AM