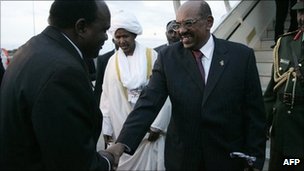 African leaders have called for the ICC to suspend President Omar al-Bashir's arrest warrant
A Kenyan court has issued an arrest warrant for Sudan's President Omar al-Bashir over alleged war crimes in Darfur.
The ruling came after Kenya allowed Mr Bashir to visit in August in defiance of an International Criminal Court (ICC) warrant for his arrest.
The judge said he should be arrested if he "ever set foot in Kenya" again, the AFP news agency reports.
Kenya is a signatory to the treaty which established the ICC in 2002.
But like most African countries, it has refused to enforce the ICC warrant.
'Politically motivated' In his ruling in a case brought by a non-governmental organisation, the International Commission of Jurists (ICJ), Judge Nicolas Ombija said Mr Bashir's arrest "should be effected by the Attorney General and the Minister for Internal Security should he ever set foot in Kenya".
Mr Bashir was the first head of state to be indicted by the ICC, which accused him of genocide and war crimes in Darfur.
Mr Bashir denies the charges, saying they are politically motivated.
The African Union has lobbied for the arrest warrant to be deferred, accusing the ICC of only investigating alleged war crimes in Africa and arguing that arresting Sudan's president would hamper the search for peace in Darfur.
Malawi and Chad are among other African countries that Mr Bashir has visited in defiance of the arrest warrant.
Some 2.7 million people have fled their homes since the conflict began in Darfur in 2003, and the UN says about 300,000 have died - mostly from disease.
Sudan's government says the conflict has killed about 12,000 people and the number of dead has been exaggerated for political reasons.

Posted by Terrobuster at 3:41 AM