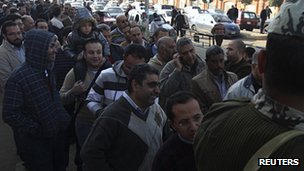 The major cities of Cairo and Alexandria are voting in the first phase of the poll
Queues have formed at many polling stations as Egyptians vote in the first elections since former President Hosni Mubarak was toppled in February.
People lined up early in many places but there are also reports of polling stations opening late because of administrative problems.
At the same time, Cairo's Tahrir Square is still occupied by protesters who want the poll to be postponed.
The head of the ruling military council has said Egypt is "at a crossroads".
"Either we succeed - politically, economically and socially - or the consequences will be extremely grave and we will not allow that," Field Marshal Hussein Tantawi said in a statement on Sunday.
The last nine days has seen a revival of the protest movement which forced Mr Mubarak from office, with hundreds gathered at its hub, in Tahrir Square.
At least 41 protesters have been killed and more than 2,000 wounded as tensions flared in recent days in the Arab world's most populous state.

'Lived in slavery'
Early on Monday, queues formed outside polling stations in Cairo before the official opening time of 08:00 local time (06:00 GMT).
A high turnout is being reported in many areas, and in places queues were said to stretch up to 3km (two miles).
"It was no use to vote before. Our voices were completely irrelevant," one woman in central Cairo told the AFP news agency as she went to vote for the first time in her life.
Another first-time voter said she was "voting for freedom". "We lived in slavery. Now we want justice in freedom," Iris Nawar told AP news agency.
"We are afraid of the Muslim Brotherhood. But we lived for 30 years under Mubarak, we will live with them too."
In some Cairo constituencies, voters complained that polling started late. Officials blamed various factors including the late arrival of ballot papers, a shortage of ink, the late arrival of judges supervising polling stations and a shortage of administrative officers.
BBC correspondent Reham Saleh said the city's fourth constituency - which includes many impoverished areas - is witnessing a high turnout.
She said residents of poor and squatter areas are showing great enthusiasm to participate and are standing outside the booths, helping one other to understand how to cast their vote so that it is valid.
State-run TV said Field Marshal Tantawi met voters at polling stations in the Heliopolis and Nasr City areas.
The voting begins an election timetable which lasts until March 2012. The first stage, running until January, covers elections to the 508-member People's Assembly.
About 50 million people are eligible to vote out of a population in excess of 85 million - with candidates from 50 registered political parties.
Analysts say the voting procedure is complex and there has been little time for campaigning, so it is unclear how many people will cast ballots.
The new parliament is likely have a strong Islamist bloc led by the Muslim Brotherhood, liberal groupings and some reconditioned relics of Hosni Mubarak's old party, says the BBC's Kevin Connolly in Cairo.
Official results from the first phase of voting should be announced on Wednesday, but the final make-up of the lower and upper house of parliament will not be clear until March.

Mass demonstrations - in Cairo and beyond - had called for military rule to end before the parliamentary elections were held.
The protesters fear the Supreme Council of the Armed Forces led by Field Marshal Tantawi, which is overseeing the transition to democratic rule, is trying to retain power.
"We reject any resolution taken by the military council - except for the handover of power to an authority that we approve. Then we will be making the decisions in Egyptian politics," said protester Samira Hosni.
There have also been smaller gatherings expressing support for the country's interim military rulers.
In a separate development early on Monday, a pipeline in Egypt which supplies Israel and Jordan with natural gas was attacked by saboteurs, Egypt's Mena state news agency said.
Witnesses reported seeing masked men driving away from the pipeline, close to the town of Arish, before two blasts were heard. It is the ninth such attack on the pipeline this year.

Lyse Doucet BBC News, Qasr al-Dobara School, Cairo
On a chilly Cairo morning, queues formed early at this polling station for women. Within an hour, they extended down the street - an orderly, patient group of Egyptians eager to participate in this process.
"It matters," said one smartly dressed woman. "This election is different." Everyone I spoke to said they were here "for Egypt".
As the queue grows, Cairo life resumes its normal rhythms - a cacophony of honking car horns in famously clogged streets, the aroma of falafel frying wafts through the air.
Party representatives are here, directing traffic, but also handing out flyers, in violation of election rules. One person handed me a 2012 calendar with a candidate's smiling face.
Reports from other centres in Cairo speak of stations not opening on time, ballot papers not ready, or scuffles in the queues. And just down the street, protesters are gathering at Tahrir Square - their political space - not polling.

Posted by Terrobuster at 3:37 AM