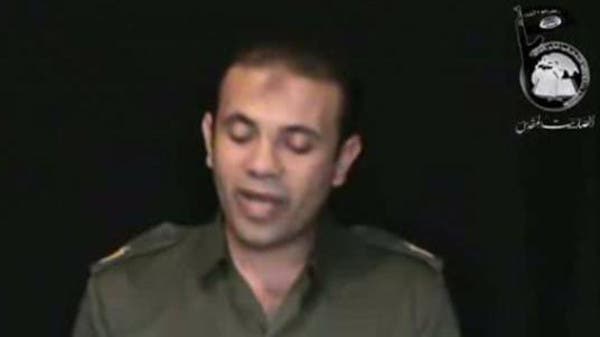 The video posted on militant websites shows a man identified as Waleed Badr, who wears a major’s uniform. He says in the video that the Egyptian army is “bent on fighting religion” and “loves America” more than Egyptians.(Al Arabiya)
Associated Press, Cairo
An ex-Egyptian army officer carried out the suicide bombing last month that unsuccessfully targeted the country’s interior minister, a video posted online Saturday by al-Qaeda-inspired militants claims.

Military officials reached by The Associated Press declined to comment on the video posted in the name of the Ansar Jerusalem militant group, which has carried out other attacks in the country’s lawless Sinai Peninsula. But it comes as security officials already sacked one police officer over alleged ties with Islamists as turmoil persists over the country’s July 3 military coup.

The video posted on militant websites shows a man identified as Waleed Badr, who wears a major’s uniform. He says in the video that the Egyptian army is “bent on fighting religion” and “loves America” more than Egyptians.

An unnamed narrator says officials fired Badr, who graduated from a military academy in 1991, from the army because he used to criticize officers for not being pious. The narrator says Badr also fought with militants in Afghanistan and Syria, but failed to get to Iraq after being arrested in Iran and held for a year in prison. The narrator gives no dates for these events and the AP could not immediately trace Badr’s whereabouts for this time.

The video also shows a car in streets described as being close to the home of Interior Minister Mohammed Ibrahim in Cairo. It shows the minister’s motorcade and provided a description of his armored SUV. The video does not explain, however, why the bombing failed to kill Ibrahim. The blast Sept. 5 killed one person and injured 22 others.

Ansar Jerusalem already claimed responsibility for last week’s bomb attack on a military intelligence compound in the Suez canal city of Ismailia and for a suicide car bomb attack on a security headquarters in the town of el-Tor, in southern Sinai on Oct. 7. Earlier, the group claimed attacks on gas pipelines to Israel, rockets targeting Israel and a 2012 shootout along the Israeli-Egyptian border in which three militants and an Israeli soldier were killed.

Attacks in the Sinai and elsewhere have risen following the July 3 military coup that overthrew Islamist President Mohammed Morsi. Since then, supporters of Morsi’s Muslim Brotherhood have staged near-daily rallies around the country, protesting security crackdown in which hundreds have been killed and more than 2,000 of group’s members have been jailed. Morsi has been held incommunicado since his ousting and a court has ordered an outright ban on his group.

Authorities appear to have expanded the scope of their crackdown. A police officer was suspended from his duties in the Nile province of Gharbiya, north of Cairo, because he was suspected of being a Brotherhood member, security officials said Friday. The officials spoke on condition of anonymity because they were not authorized to talk to journalists.

The decision could signal that the military-backed leadership will purge Brotherhood members from the security forces, a move that could deepen tensions. Morsi supporters and those backing the military already accuse each other using violence to advance their causes.

In the video, however, Badr also criticized the Muslim Brotherhood and other Muslim groups for believing in democracy and repeated al-Qaida leader Ayman al-Zawahri’s ideology that establishing Islamic Shariah laws could only be achieved through jihad.

He urged Egyptian Muslims “to sacrifice your lives through the explosive devices and the explosive belts and to kill in the same way they kill.”

Posted by Terrobuster at 7:34 AM