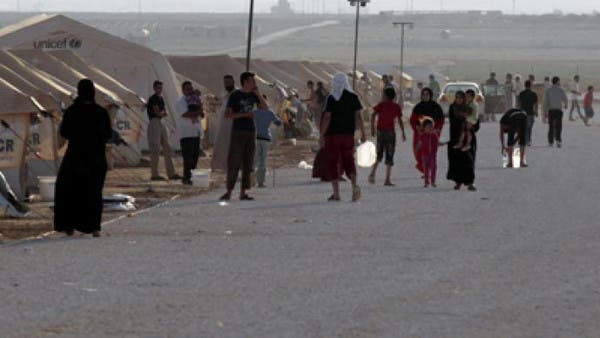 Syrian refugees gather at the Zaatari Camp, Jordan’s first official camp for Syrian refugees fleeing violence in their country, in Mafraq, near the Syrian border (File Photo: AFP)
Al Arabiya
A Syrian refugee mother living in Jordan ended the life of her son with a gasoline injection, saying she wanted to relieve him from the difficult living conditions, AFP’s Arabic wire service reported on Friday, quoting a Jordanian security source.
The mother had previously attempted to kill her 7-year-old son by hanging. But the failed attempt left the child with severe wounds, and he was hospitalized for medical treatment, the source said.
While visiting him at Princess Basma Hospital in Irbid, northern Jordan, the mother injected the child’s serum with gasoline.
“The breathing device launched a warning once the child’s heart stopped beating and the doctors rushed to save him while the smell of gasoline spread in the room and exposed the crime,” AFP quoted the unnamed security source as saying.
An estimated 450,000 Syrian refugees have fled to Jordan since the outbreak of the Syrian civil war. Most of them live in the northern part of the country bordering Syria.

Posted by Terrobuster at 7:41 AM