The Sultan of Brunei Hassanal Bolkiah announced the enforcement of Sharia law next year. 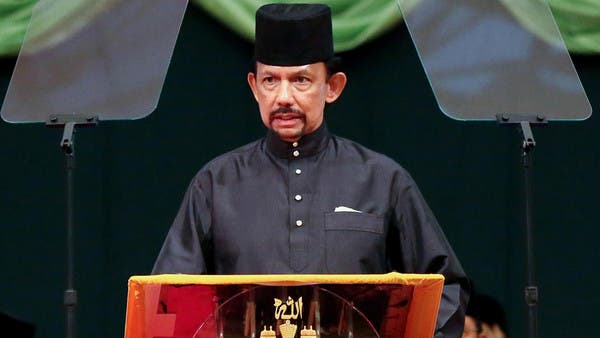 The Sultan of Brunei Hassanal Bolkiah announced the enforcement of Sharia law next year. (AFP)
Al Arabiya
The Sultan of Brunei on Tuesday announced the enforcement of Shariah (Islamic law) within its criminal law to take effect next year.
The law would be enforced from April, said the 67-year-old Sultan Hassanal Bolkiah, one of the world’s wealthiest people, in a move to shift to more conservative Islam.
“It is because of our need that Allah the Almighty, in all his generosity, has created laws for us, so that we can utilize them to obtain justice,” the sultan was quoted as saying by Reuters news agency.
The ruler of the oil-rich country of 400,000, Bolkiah first called in 1996 for the introduction of sharia criminal punishments.
Brunei already practices a conservative brand of Islam relative to its Muslim neighbors in Southeast Asia, Malaysia and Indonesia.
Nearly 70 percent of the sultanate’s people are Muslim ethnic Malays, while about 15 percent are non-Muslim ethnic Chinese, followed by indigenous peoples and other groups.

The sale and public consumption of alcohol is banned and activities of others religious are closely restricted.
(With Reuters)
Posted by Terrobuster at 9:59 PM