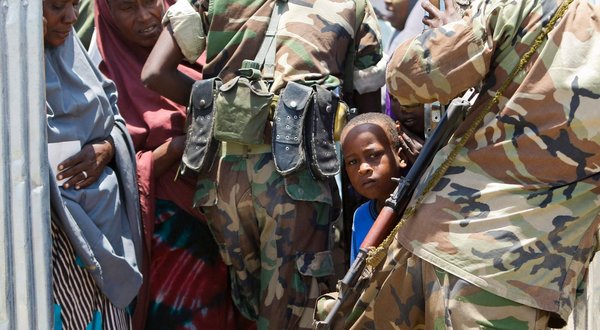 Dai Kurokawa/European Pressphoto Agency
A Somali boy at a food distribution center Monday in Mogadishu. The United Nations says that 750,000 people in Somalia are in urgent need of food.

NAIROBI, Kenya — Intense fighting erupted along the Kenya-Somalia border on Friday as the Shabab militant group tried to take back a slice of strategic territory from militias allied with the Somali government. At the same time, Shabab fighters are breaking up camps for victims of Somalia’s famine, sending tens of thousands of starving people straight back into drought-stricken areas.

Follow @nytimesworld for international breaking news and headlines.
The Shabab militants say they will provide enough food to tide people over until the next harvest, expected around January, and some of the people who recently left seemed content with the initial rations of rice, sugar, powdered milk and oil that they had been given. But many aid officials worry that the famine victims are going to soon find themselves in a bleak and barren environment once back in their home villages and that dispersing them will complicate an already strained aid effort.
“This is a nightmare,” said a United Nations official who asked not to be identified because he was criticizing the Shabab and feared reprisals. “It has been hard enough to access famine victims in Shabab areas, and now that the people have been scattered, that means more checkpoints, more local authorities to deal with, more negotiations.”
It seems that the Shabab, who have lost several chunks of territory in the past few months, are regrouping to some degree. In August, Shabab leaders pulled hundreds of fighters out of Mogadishu, Somalia’s capital, calling it a strategic withdrawal, though it seemed more of an acknowledgment that their mostly young and inexperienced troops could no longer go toe-to-toe with a better armed and trained African Union peacekeeping force. The African Union has 9,000 soldiers in Mogadishu to support Somalia’s Transitional Federal Government, whose own army is weak and fragmented.
But in recent days, witnesses have reported hundreds of Shabab fighters heading south toward Somalia’s border with Kenya. The border area is controlled by a fractious group of warlords and militias who get covert support from Kenya and Ethiopia and are nominally loyal to Somalia’s transitional government. On Friday before dawn, Shabab forces struck Dhobley, a market town jointly controlled by an Islamist warlord and a French-educated intellectual who is trying to form his own ministate called Azania, an ancient Greek name for the Horn of Africa.
According to Adan Adar, Somalia program director for the American Refugee Committee, a private aid group that assists feeding centers in Dhobley, the Shabab attacked from several different directions, and all sides had casualties.
“It was a big fight,” he said. “And it’s likely to impact humanitarian operations because there are many feeding centers in Dhobley.”
By midafternoon on Friday, witnesses said that the Shabab fighters had been repulsed and that the Kenyan military was poised to get involved should the Shabab try again to take Dhobley. The town is only a few miles from the border with Kenya, and Kenyan officials are increasingly concerned that the Shabab, a vehemently anti-Western group that has pledged allegiance to Al Qaeda, might attack inside Kenya.
A Kenyan security official interviewed Friday said that he had just been sent to the border and that hundreds of Kenyan soldiers and police officers were preparing to enter Somalia. Residents in the area reported seeing Kenyan fighter planes and helicopters flying over Dhobley, though Kenyan officials have thus far been careful not to engage directly in Somalia’s internal fighting — or at least not to allow such activities to be made public.
The Shabab control much of the southern third of Somalia, which has been hit by a famine caused by drought and war. The United Nations says that tens of thousands of people, mostly children, have already died and that 750,000 urgently need food and could starve to death in the next few months if aid efforts are not rapidly scaled up. The Shabab have blocked most large Western aid agencies from operating in their areas, and in a few places, the group’s fighters have set up their own camps to feed starving people who have fled drought zones, sometimes even forcing people to stay in their camps.
But last week, the group abruptly announced that it was closing several of its camps, and Shabab fighters began ordering tens of thousands of people to return to their farms to plant crops before the rainy season starts, which should be in a few weeks. The Shabab called it a “resettlement program,” and the picture was mixed about how well it was going.
In Buurhakaba, a midsize town that the Shabab control, residents said that after the Shabab closed down the camp there, many people decided to flee all the way to Kenya.
“There is no way for people to return home because back there, there’s nothing to eat,” Sultan Said, a resident of Buurhakaba, said by telephone.
But, he added, there had not been much food anyway in the Shabab-run camps because the Shabab fighters had been stealing it.
“They’re starving too,” Mr. Sultan said.
In Baidoa, a bigger Shabab-controlled town, some people who had sought help in the Shabab-run camps said the fighters had given them enough food to survive until the harvest. The International Committee of the Red Cross and Unicef have been able to distribute lifesaving food in some Shabab areas, and both organizations say that despite difficulties, they have been reaching more people in recent weeks.
One destitute farmer who spoke by telephone from a village about 50 miles outside of Baidoa said that he had been living in a Shabab-run camp in Baidoa for two months and that the militants had treated him and his five children fine. When the Shabab decided to shut down the camp about a week ago, he said, nobody protested and the Shabab provided sacks of food and rides by truck back to the home villages of the camp residents.
“If it rains, we’ll be O.K.; if it doesn’t, there will be famine,” the man said, adding that he did not like or dislike the Shabab.
But at the end of the interview, the man pleaded not to be identified, saying the Shabab did not allow people to talk to the news media.

A version of this article appeared in print on October 1, 2011, on page A4 of the New York edition with the headline: Somali Militants Attack a Strategic Town Near the Kenyan Border.

Posted by Terrobuster at 8:59 PM