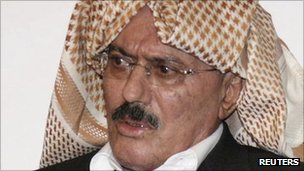 Yemeni President Ali Abdullah Saleh has said he will not stand down as promised if his opponents are allowed to stand in elections to succeed him.
Mr Saleh, who returned to Yemen last week after a three-month absence, warned of civil war in an interview with Time and The Washington Post.
He faces a widespread protest movement as well as an insurrection by renegade army units and tribal fighters.
He has refused to sign a transition deal brokered by Gulf states.
Under the deal, he would hand over to Vice-President Abdrabuh Mansur Hadi in return for immunity from prosecution.
"If we transfer power and they [rival forces] are there, this will mean that we have given in to a coup," Mr Saleh said in his first interview since returning to Yemen.
"If we transfer power, and they are in their positions, and they are still decision makers, this will be very dangerous. This will lead to civil war."
Mr Saleh spent three months in Saudi Arabia for treatment after his presidential palace was shelled in June.
Journalists said Mr Saleh's face was marked by "deep scars" and he had trouble hearing. No close-up photographs were published with the articles.
Anti-government protesters have been camped out in an area of the capital Sanaa - dubbed Change Square - since January, demanding an end to President Saleh's rule.
'Misunderstanding' Many have been killed, but in the interview Mr Saleh blamed army units that have defected to the opposition and tribal fighters who support the protesters.
"They assassinate protesters from behind so they can blame the state," he said.
However, he said he remained committed to the deal brokered by the Gulf Co-operation Council (GCC) and blamed the opposition for delays.
"This is a misunderstanding. We are willing within the next hours and next days to sign it, if the JMP [opposition coalition] comes closer," he said.
"We don't want to prolong it. And we don't want this crisis to continue. We want this country to get out of this crisis. The transfer of power is a given, whether sooner or later."