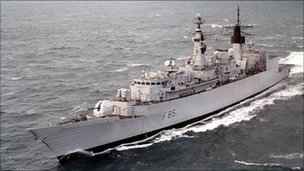 More than 1,000 Royal Navy staff will learn they are being made redundant later as part of a first round of military job cuts.
Of about 1,020 job losses, a third are compulsory. Some 810 sailors applied for redundancy and 670 were accepted.
The navy is cutting numbers by 5,000 to 30,000 by 2015, as part of 22,000 armed forces cuts designed to help save £5bn.
Defence Secretary Liam Fox said the MoD had to share the blame for the cuts having "helped create the problem".
Earlier this month about 920 soldiers and 930 RAF personnel were told they were being made redundant, in the first tranche of cuts announced in last year's Strategic Defence and Security Review.
The next round of redundancies is due in March. The Ministry of Defence is also shedding 25,000 civilian staff over the next four years.
Speaking to the Guardian newspaper, Dr Fox reflected on the actions of military chiefs under previous government, saying: "I think the MoD consistently dug a hole for itself that it eventually found that it could not climb out of.
"It is irritating to hear some of those who helped create the problem criticising us when we try to bring in a solution."
A "complete breakdown of trust" between the military and the government over ballooning costs reached its zenith towards the end of Gordon Brown's premiership, the defence secretary said.
'Morale knocked' He added that he wanted the armed forces to "take the pain early" so the military could balance its books and regain lost credibility.
Morale within the forces had "taken a knock" but most people understood that reform "had to be done", Dr Fox said.
Only personnel not on or preparing for deployment, and who have taken all their operational leave, have been considered for redundancy from the Royal Navy.
This includes sailors who took part in the Libya campaign on HMS Cumberland and other ships now being decommissioned.
Plymouth-based HMS Cumberland was the first UK warship sent to Libya earlier in the year.
The MoD says the decisions it faces are not easy but that they will "help to defend the UK, protect our interests overseas and enable us to work effectively with allies and partners to deliver greater security and stability in the wider world".
Many of the job cuts in the coming years are expected through a decrease in recruitment and by not replacing those who leave, but more than half are likely to be redundancies.