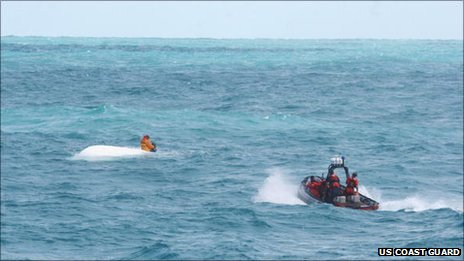 Nick Schuyler's body temperature had plummeted to 31.5C by the time of his rescue by the US Coast Guard, shown here in a handout photo


A 67-year-old US man built a camp and survived on bugs, leaves and creek water for six days last week after driving his car into a ravine in a national forest near Los Angeles.
David Lavau's relatives had reported him missing to authorities but launched their own search after discovering he had used a debit card at a grocery store near where he was found.
We know that the human body can withstand misery that defies comprehension.
But the greatest feats of survival speak equally to the persistence and durability of the human spirit and the courage of those forced to undergo extraordinary trials.
Football players in the Gulf of Mexico, February 2009: Four athletes, including two professional American football players, were thrown into the Gulf of Mexico, 75 miles (121km) from the coast after their fishing boat capsized. 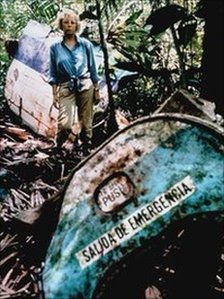 Juliane Koepcke later returned to the scene of the crash with a film-maker
The boat flipped over when its owner gunned the engine in an effort to yank free a stuck anchor. The men kept calm at first, even as night fell and a storm approached, and clung to the overturned hull. Over nearly two days - and in swells as high as 15ft (4.5m) - the men began shivering violently and hallucinating as they succumbed one-by-one to delirium, hypothermia and exhaustion. Only Nick Schuyler, a personal trainer, survived.
Amos Wayne Richards, September 2011: Mr Richards, 64, broke his leg and dislocated a shoulder in a fall on a solo hike through a Utah desert. With only two protein bars to eat, Mr Richards reset his shoulder and began crawling across the terrain toward his car.
He collected rainwater in a bottle and managed to crawl and drag himself five miles. After four days he was discovered by rescuers searching by helicopter and treated for the leg injury and for dehydration.
Juliane Koepcke, 1971: The 17-year-old and her mother, a zoologist, were on a turboprop plane flying from Lima, Peru, to a remote spot in the Amazon rainforest, when the plane was struck by lightning.
The fuselage broke into pieces and Ms Koepcke found herself falling in open air, then lost consciousness. She came to still in her seat (which was attached to the intact row) after plunging more than two miles through the air, through the jungle canopy and to the jungle floor. 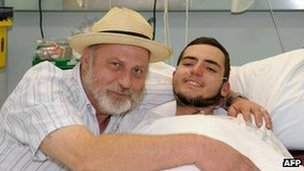 Some Australian media suggested Jamie Neale staged his ordeal, but police said it was genuine
The 91 others onboard were killed. Over the next ten days - as maggots infested her wounds - Ms Koepcke waded through the bush and through crocodile-infested streams, and finally found a hut on a river where a team of lumberjacks rescued her. Film-maker Werner Herzog had been scheduled to fly on the plane but was bumped at the last minute.
Jamie Neale, July 2009: The British hiker, then 19, was lost for 12 days in the Blue Mountains of Australia, west of Sydney.
He told authorities he became disoriented and went off the track, then switched into "survival mode" after rescue helicopters ceased flying overhead. He survived in part by using tree bark as a blanket, and was rescued when two soldiers hiking in the bush heard his calls for help.
Aron Ralston, April 2003: The subject of Danny Boyle's film 127 Hours, Mr Ralston was hiking alone in an isolated Utah canyon when a rock fell about two feet and pinned his arm and trapped him. The experienced hiker, 27, ran out of water three days later, and two days after that he realised he would only survive if he took drastic action to sever his own arm. 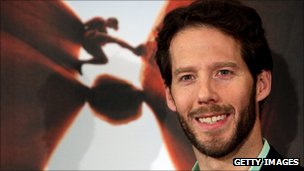 Aron Ralston was feted by Hollywood when Boyle's film 127 Hours, based on his ordeal was released
"I was able to first snap the radius and then within another few minutes snap the ulna at the wrist and from there, I had the knife out and applied the tourniquet and went to task. It was a process that took about an hour," he said later. He then rappelled to the floor of the canyon, where he found other hikers. Park rangers later used heavy kit to move the 800lb (363kg) boulder and recover Mr Ralston's arm, which they took to a mortuary.
Jin Abe and Sumi Abe, March 2011: Sumi Abe and grandson Jin Abe were trapped under their collapsed house when the 11 March tsunami levelled their neighbourhood in Ishinomaki along Japan's north-eastern coastline.
After nine days the teenager was finally able to crawl through a hole in the debris. They had survived on yogurt and other scraps from the refrigerator and were rescued after nine days, showing signs of hypothermia. 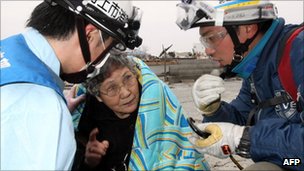 Sumi Abe, 80, and her grandson endured a snowstorm and freezing temperatures
Daryl Jane, December 2006: The resident of the US state of Washington began trapped when his Jeep got stuck in snow on a remote road near Mount Adams. Mr Jane, 37, rationed his water, rice cakes and banana chips and when the water ran out, drank from puddles. After almost two weeks he had already written goodbye notes to his love ones when searchers on snowmobiles found him. Despite the freezing temperatures he suffered no frostbite.
Colin Jones, June 2003: The Australian miner became trapped 1.5 miles underground in a coal mine on Australia's east coast when his tractor tipped over in a mine shaft, crushing his arm against a wall. Terrified the tractor would explode before rescuers could arrive to free him, he begged a co-worker to amputate. When the other man refused, he did it himself with a short-bladed hobby knife.
Joe Simpson, 1985: British climbers Joe Simpson and friend Simon Yates were scaling the 21,000ft (6,400m) Siula Grande mountain in the Andes when Mr Simpson, then 25, fell and shattered his leg. Mr Yates, 21, spent a day trying to lower Mr Simpson down to the base on a rope, but ended up mistakenly lowering him over a ledge. Mr Simpson dangled helplessly while Mr Yates began to lose his own footing. When Mr Yates cut the rope to save his own life, Mr Simpson fell off the side of the mountain. Trapped without food or water, crippled and hallucinating from the pain, Mr Simpson managed nevertheless to crawl out of the crevasse and inch his way across a boulder field, a glacier, around a lake and into a rocky valley, reaching camp three and a half days later. He later wrote about his ordeal in a book, Touching the Void, that was made into an award-winning film in 2003.
Old Christians Uruguayan amateur rugby team, 1972: A chartered Uruguayan Air Force plane was on a flight to Chile when it crashed in the Andes, killing a dozen of the 45 people aboard. Trapped on a snowy, isolated peak, others soon succumbed to injuries, exposure or starvation, including eight killed in an avalanche. When the food ran out, some of the men of the ate the flesh of the dead, and one who refused died of starvation. The 16 survivors were rescued 72 days after the crash after two men hiked for ten days into Chile to find help.

Posted by Terrobuster at 8:22 PM