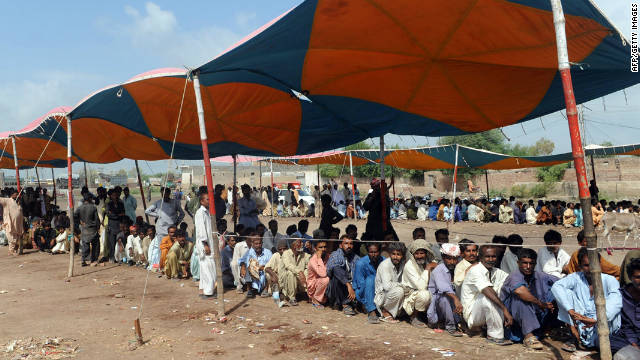 Pakistani flood-affected people queue up at a relief camp in the flood-hit Badin district on September 29, 2011.
STORY HIGHLIGHTS
Islamabad, Pakistan (CNN) -- The death toll continues to rise from devastating flooding in southeastern Pakistan, with authorities saying Friday that 107 children are among the 434 people killed.
Roughly 660,000 people are living in refugee camps in the wake of high waters that have wrought havoc for several weeks, Pakistan's national disaster authority said in a statement. This is fewer than the 700,000 reported by the same agency just over a week ago.
About 8.9 million people have been affected by the floods, which have destroyed 1.5 million homes in 37,000 villages in Sindh province alone, according to the statement.
This marks the second straight year that Pakistan has seen deadly flooding. In August 2010, more than 20 million people were displaced and 1,700 people killed.
The latest disaster has lasted longer than a month and caused an estimated $9.7 billion in damage to homes, roads and farms.
The United Nations warned Friday that humanitarian aid is running out in the hard-hit region.
This comes two weeks after the international organization and its partners launched an effort to raise $357 million to help those most affected -- of which only $19 million has been received, the U.N. said on its website.
Safe drinking water and emergency shelter materials could run out within weeks, while agencies on the ground have enough food for a month for the hundreds of thousands affected.
"It is tragic to see families displaced from the floods with no shelter and barely enough to survive on," said Fawad Hussein, a U.N. official focused on flood relief. "These families worry their children will go hungry, and without access to safe drinking water, they fear they will become sick from drinking contaminated water."
Posted by Terrobuster at 8:45 PM