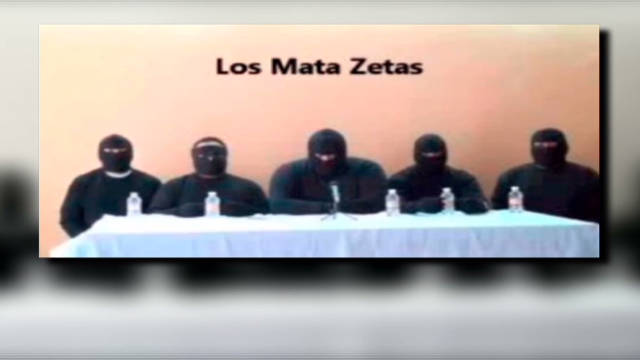 New paramilitary group appears in Mexico
STORY HIGHLIGHTS
(CNN) -- A video purporting to be from a vigilante group whose goal is the eradication of the Zetas cartel from the state of Veracruz, Mexico, has surfaced on the Internet, but its credibility remains unproven.
Five masked men dressed in black appear on the video, sitting behind a long table. The spokesman explains that they are a group called the "Mata Zetas," or Zeta Killers. They describe themselves as an "extermination" force that works as the armed front "of the people and for the people."
The speaker says that the group's only goal is to kill members of the Zetas, a ruthless cartel whose area of influence includes the eastern state of Veracruz. Members of the Mata Zetas are prohibited from committing crimes such as extortion or kidnappings, according to the video.
The video was released via YouTube days after 35 bodies were found in two trucks during rush hour in the city of Boca del Rio.

But is the video really evidence of the birth of a vigilante group in Veracruz?
In the video, the speaker does not claim responsibility for the 35 deaths.
It is also not the first time that a seemingly grassroots group emerged in Veracruz as a counterbalance to the cartels.
In 2007, a group named the "Gente Nueva," or New People, made itself known through menacing notes, web-posted videos, torture and executions and quasi-patriotic rhetoric.
The group left notes next to bodies, claiming that the victims were Zetas or supporters of the Zetas. But U.S. officials with knowledge of the group said Gente Nueva was not a vigilante group but a facade for the Sinaloa cartel, which at the time was battling the Zetas and Gulf Cartel in Veracruz. The Zetas and Gulf cartel have since split into warring factions.
Mexico's attorney general's office responded with a statement saying that it would investigate the video and any group that tries to take justice into its own hands.
"The only path to reach long-lasting security and peace is through the rule of law and strengthening of our institutions," the statement said.
In October of last year, another possible paramilitary group surfaced in Michoacan state. A group calling itself the "Pelotones Omega" distributed fliers indicating its members would fight against kidnappers, murderers and other criminals.
Posted by Terrobuster at 10:36 PM