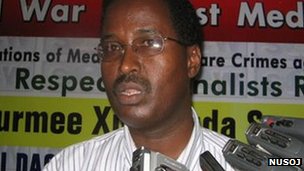 Abukar Hassan Kadaf is the 29th journalist to be killed in Somalia since 2007
The head of a private Somali radio station shut down by Islamist militants has been killed outside his home, an eyewitness has told the BBC.
The witness said that Abukar Hassan Kadaf was shot by two men carrying pistols in the capital, Mogadishu.
Mr Kadaf had run Radio Somaliweyn until it was looted by al-Shabab in 2010 when the group still operated in the city.
Afterwards he became involved in local politics, but colleagues say he was planning to relaunch the station.
War-torn Somalia has not had a functioning central government for more than 20 years and is one of the most dangerous places in the world for journalists to work.
'Tragedy' Last month, the head of the Shabelle Media Network, Hassan Osman Abdi, known as "Hassan Fantastic", was shot outside his house by five armed men.
A witness told the BBC Somali Service that two gunmen shot Mr Kadaf several times at about 18:00 local time (15:00 GMT) before running away from the scene.
"This murder... is a another tragedy and continues to further undermine freedom of expression and freedom of the press in Somalia," Omar Faruk Osman, secretary general of the National Union of Somali Journalists (NUSOJ), said in a statement.
According to NUSOJ, Mr Kadaf had been working in the past few days on the re-launch of Radio Somaliweyn.
He is the 29th journalist to be murdered in Somalia since 2007, the union said.
The BBC's Mohamed Dhore in Mogadishu says over the last 18 months, Mr Kadaf, 43, had also been helping local MPs who have been trying to set up a regional administration.
Political assassinations have been common in Somalia during more than two decades of conflict involving many warring factions.
Al-Shabab, which joined al-Qaeda this month, pulled out of their bases in Mogadishu last August as part of what it said was a "tactical retreat" but has since staged periodical attacks in the city.

Posted by Terrobuster at 9:51 AM