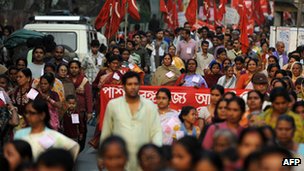 Unions want universal social security cover for workers in India's vast unorganised labour sector
Millions of Indian workers are expected to join a strike against high inflation and to demand better working conditions and an end to selling off state firms.
The strike has the support of most of India's major trade unions and thousands of smaller unions from across the political spectrum.
Banks, transport, post offices and ports are thought most likely to be affected by the industrial action.
But services on India's rail network are not expected to be disrupted.
Although India's inflation rate dropped from 9.1% in December, it remains stubbornly high at 7.5%.
Growth for the financial year ending in March is also expected to be around 7%, lower than the previous forecasts of about 9%.
The government of Prime Minister Manmohan Singh is trying to cut its budget deficit by selling stakes in state-run companies - something the unions object to.
Other demands include measures to curb inflation, universal social security cover for non-unionised workers and enforcement of labour laws.
States such as West Bengal, Tripura and Kerala, where the communist parties have greater influence, are expected to be most affected by the strike.

Posted by Terrobuster at 7:31 PM