Traffic police and other signs of normality in Mogadishu 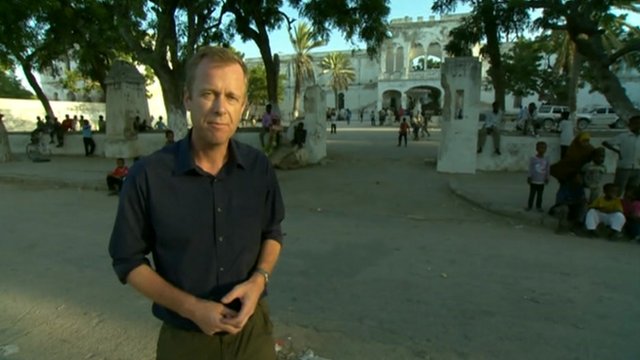 Andrew Harding in Mogadishu: "It does feel as if the city is slowly coming back to life"
For the past 20 years, the only law that has existed in Mogadishu has come from the barrel of a gun.
Today 45-year-old Mohammed Haroum is trying his luck with a whistle.
It is not easy, he concedes gently, as a pick-up truck loaded with armed men tears past him on a dusty bend in the road, overlooking the ruins of the old port.
Mohammed is a traffic policeman - in a clean white shirt and beret - it is a job he resumed last year after a two-decade break while Somalia was busy collapsing.
"These days", he says, "people do not know what a drivers' licence is. They have never seen one. No-one has even heard of insurance.
"We are learning to be normal again."

Normality has emerged as an option here in the past few months, since the militant Islamist group al-Shabab was pushed out of Mogadishu, and the raging front line that ran through the city centre shifted to the nearby countryside.
The constant chorus of gunfire has been replaced by the hammering of building sites, the roar of commerce, and the whistling of Mohammed and his colleagues.
Instead of scurrying from one bombed out building to the next, Somalis have reclaimed their pavements.
Cafes and stalls have sprung up.
Because so few people can read these days after years without education, those walls that are still standing are now daubed with colourful cartoon adverts - some just for cans of food or shampoo, but I have seen giant teeth being pulled out, and an elaborate illustration of a gynaecologist at work.
A strong wind has been blowing in from the sea all week. It stirs up the dust, and tugs at the patchwork tents that cluster in almost every open space. 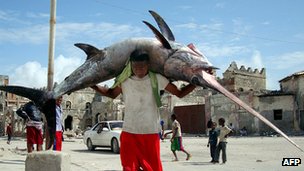 With the relative peace in Mogadishu, fishermen are returning to bring their catch to market
For all the recent changes in the city, this is still a pretty desperate place.
All over Mogadishu, tens of thousands of families live in these tiny shelters - some in the spectacular, skeletal ruins of their old homes.
Others have fled here, over the years, from famine or conflict elsewhere.
The city has become a safe haven. Whether it stays that way is another matter.
Technically, Mohammed the traffic policeman now works for Somalia's transitional federal government. Emphasis on the world "transitional."
Depending on your point of view, that government is either the latest flawed but brave attempt to forge a new state out of anarchy.
Or it is a Frankenstein's monster - a corrupt, illegitimate body, created, paid for, and protected by foreign governments, packed with clan warlords, and far removed from the lives and the wishes of ordinary Somalis?
Mohammed suggests the truth lies somewhere in between.
He gets paid $100 (£63) a month. "It is not enough," he says, "but I think the government is getting better.
"People are beginning to listen to it - and to me. I still get plenty of threats at the roadblocks. But my whistle works well now."

I'm no politician but after 20 years I think we've all had enough chaos.”

Bashir Youssouf Barre Fisherman
Mohammed's salary is paid, indirectly by Western nations, and it is worth pointing out that, although the Somali transitional government has now been up and running in one form or another for eight years, it is still not trusted to handle the cash.
The United Nations does that instead. Somali politicians seem to have a particular habit of pocketing most of their ministerial budgets.
This week, in far away London, some of those politicians have been gathering with foreign leaders to try to put the whole of Somalia back together again.
The country has long disintegrated into a jumble of rival administrations, clans and warlords. Mogadishu is just one piece of that jigsaw.
There is good reason to expect another failure. Trust is in short supply here.
But in Mogadishu, there are at least hints of optimism.
Shark meat You can smell the city's fish market long before you reach the doorway.
Inside, Bashir Youssouf Barre is shouting down his mobile phone - haggling over the price of shark meat.
He is 44-years-old - a tall, boisterous man with a wispy, greying beard. 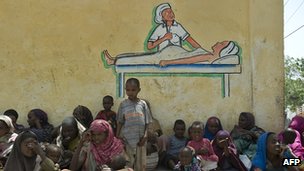 Widespread illiteracy in Mogadishu has seen information images painted across the city
He has just come in from a night's fishing on his small fibreglass boat. I ask him about pirates. "They are scum," he says. "But we haven't seen any around here for a while."
Bashir is vaguely aware that something happened in London this week.
"I'm no politician," he says, "but after 20 years I think we've all had enough chaos. Our soldiers must defeat al-Shabab. Now they've joined with al-Qaeda, there can be no negotiations."
As for the transitional government, Bashir is not sure. "I only trust bits of it," he says.
"You mean you trust ministers who are from your own clan," I suggest. He laughs and nods.
A man walks past us with a huge hammerhead shark balanced on his shoulder.
He lets it drop with a thud on the floor. The flies move in, and three scrawny kittens emerge from a corner and start to lick a pool of dark blood.

From Our Own Correspondent

Posted by Terrobuster at 8:46 PM