Journalist Marie Colvin died trying to get her shoes, her paper reports 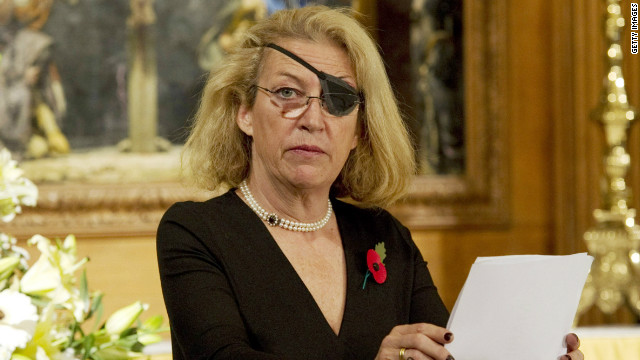 Sunday Times reporter Marie Colvin was one of two Western reporters killed in Homs on Wednesday.
STORY HIGHLIGHTS
(CNN) -- Marie Colvin, a veteran correspondent who was killed in Syria last week, died trying to get her shoes so she could escape a shelling attack, her paper reported Sunday.
Colvin, a New York native, worked for London's The Sunday Times
As is the custom in Syria, she took off her shoes upon entering a building that was serving as a makeshift press center. She was on the ground floor when rockets hit the upper floors, The Sunday Times reported.
Thinking then that the building was a target, Colvin rushed to retrieve her shoes in the hall. A rocket landed just a few yards away, the paper said.
Colvin, 56, was the only British newspaper journalist inside the Homs neighborhood of Baba Amr, was killed alongside French journalist Remi Ochlik in the attack Wednesday.
Her mother, Rosemarie Colvin, said aid workers have been trying for days to remove her daughter's body from the war-ravaged country. They tried again Saturday, but ultimately determined that the situation was too dangerous.
Her daughter's body may be buried inside Syria now, she said.
"We were told yesterday that today was probably the last day," the elder Colvin told CNN.
She added that she believes her daughter was deliberately targeted by Syrian government forces.

Colvin's death amid Syria's growing war
"They were first in another house, and the top floors there were blown off," she said. "First (the Syrian forces) rocketed the front of the building," she said, fueling suspicion that the attack against a makeshift media center where Colvin and Ochlik were holed up was no accident.
The Syrian government was not immediately available for comment.
The day before she was killed, Colvin had given media interviews to networks like ITN and CNN about the ongoing clashes in Homs, and about a child who was killed in the city.
"The baby's death was just heartbreaking," she told CNN's Anderson Cooper. "We just watched this little boy, his little tummy, heaving and heaving as he tried to breathe. It was horrific. My heart broke."
Colvin reported Tuesday that there was "constant shelling in the city" and that the child's death was "just one of many stories" in violence-wracked Homs. "It's chaos here."
Journalists and activists have been sneaking into Syria in an effort to report on the protests and clashes that have persistently challenged the authority of President Bashar al-Assad.
Colvin said graphic images like that of the dying child, who was reportedly struck in the chest by a piece of shrapnel, needed to be shown.
"Something like that I think is actually stronger for an audience, for someone who's not here, for an audience for which the conflict, any conflict, is very far away. But that's the reality," she said.
The siege of Baba Amr, where 28,000 civilians are "hiding, being shelled, defenseless," Colvin reported, has become a flashpoint of the country's bloody year of violence.
"That baby probably will move more people to think, 'What is going on and why is no one stopping this murder in Homs that is happening everyday?'"
"There are no military targets here," Colvin reported, refuting Syria claims that its forces are only hunting terrorists.
"It's a complete and utter lie," she said of the government's response. "The Syrian Army is basically shelling a city of cold, starving civilians."
A day later, Colvin and Ochlik were killed.
Colvin, a Yale graduate renown for reporting on war's more human consequences, had for years worked in conflict zones and high risk areas, despite losing an eye in 2001 during a grenade attack in Sri Lanka.
Since her death, her family has started a fund in her honor.
"We felt we had to do something so there was a place that people could donate," said family member Michael Colvin.
The Marie Colvin fund is intended to direct resources to charities that her family says she would have supported.

CNN's David Ariosto contributed to this report.
Posted by Terrobuster at 1:00 AM