A Taliban suicide car bomber has killed at least nine people and wounded 10 others in an attack at Jalalabad airport in eastern Afghanistan.
The insurgents said the bombing was in revenge for a Koran-burning incident at a US air base a week ago.
The burning, which the US says was unintentional, has sparked violent protests across the country.
Nato said it had no reports of international forces being among the casualties in Jalalabad.
The airport serves both civilian and international military aircraft. Witnesses reported seeing at least four destroyed cars at the gates.
Taliban spokesman Zabiullah Mujahid said in an email to media: "This attack is revenge against those soldiers who burned our Koran.''
President Hamid Karzai has appealed for calm amid anger at the incident at Bagram air base near Kabul.
In his televised address on Sunday, Mr Karzai "condemned with the strongest words" the treatment of the Korans but added: "Now that we have shown our feelings it is time to be calm and peaceful."
Manhunt 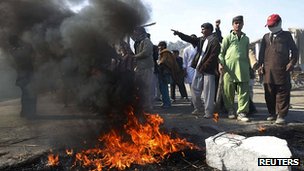 Protests have swept Afghanistan since the Koran burning incident
More than 30 people have been killed in the past five days, and further violence broke out on Sunday.
A grenade was thrown into a Nato base in northern Kunduz province during a protest, injuring several Nato personnel.
Also on Sunday, some 4,000 people took to the streets in Aybal, in northern Samangan province, attacking a police station and a US base.
Meanwhile, Afghan authorities are still hunting a 25-year-old Afghan policeman believed to have shot dead two senior Nato officers at the interior ministry in Kabul on Saturday.
Afghan officials named the suspect as a police intelligence officer, Abdul Saboor, from Parwan province.
The dead Nato officers are believed to have been American officers.
On Sunday, France and Germany followed the US and Britain in withdrawing civilian staff from Afghan government institutions in the wake of the killings.

Posted by Terrobuster at 9:43 PM