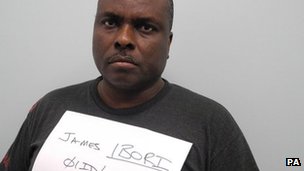 James Ibori bought one London mansion for £2.2m in cash, police say
James Ibori, a former governor of one of Nigeria's oil-producing states, has pleaded guilty in a UK court to 10 counts of money-laundering and conspiracy to defraud.
British police accuse him of stealing $250m (£160m) over eight years.
The prosecutor called him a "thief in government house".
Ibori, once seen as one of Nigeria's wealthiest and most influential politicians, was arrested in 2010 in Dubai and then extradited to London.
Some $35m of his alleged UK assets were frozen in 2007.
As his trial at London's Southwark Crown Court was about to begin, Mr Ibori changed his plea to guilty and admitted stealing money from Delta state and laundering it in London through a number of offshore companies.

Paul Whatmore Metropolitan Police
Continue reading the main story
The BBC's Chris Summers says between 20 and 30 of Mr Ibori's supporters turned up to court - some wearing T-shirts with the slogan "Free Ibori". There was not enough room for them all in the public gallery.
Prosecuting QC Sasha Wass said Mr Ibori, 53, had "tricked" his way into becoming Delta state governor, by giving a false date of birth and claiming he had no criminal record.
"He was never the legitimate governor and there was effectively a thief in government house. As the pretender of that public office, he was able to plunder Delta state's wealth and hand out patronage."
He is due to be sentenced on 16 April.
'Lavish lifestyle' Ibori's wife, Theresa, his sister, Christine, his mistress, Udoamaaka Okoronkwo, and his London solicitor, Bhadresh Gohil, have all been convicted of money-laundering.
Their convictions could only be reported on Monday after reporting restrictions were lifted.

Nigeria's Economic and Financial Crimes Commission (EFCC) had asked the UK's Metropolitan Police to look into the ex-governor's financial affairs.
"The vast sums of money involved were used to fund Mr Ibori's lavish lifestyle," Detective Inspector Paul Whatmore, the officer in charge of the investigation, said.
"We will now be actively seeking the confiscation of all of his stolen assets so they can be repatriated for the benefit of the people of Delta State."
He said that the money Ibori stole should have been used to pay for sanitation, power supplies and healthcare for some of the poorest people in the world.
Ibori spent some of the stolen money buying six houses in London - he paid £2.2m in cash for one Hampstead mansion - and put his children in expensive British private schools, police say.
DIY theft Three of the money-laundering charges relate to the sale of Delta state's share in mobile phone company V-Mobile to neighbouring Akwa Ibom state. 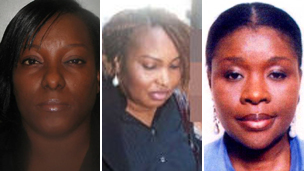 The wife, sister and mistress of James Ibori have also been convicted of money-laundering
This raised $37m which Ibori stole and laundered through his solicitor Gohil, who has been jailed for 10 years.
In 2007, a UK court froze assets allegedly belonging to him worth $35m.
His annual salary as Delta state governor was less than $25,000.
He had already left the UK when his assets were seized but he was arrested in Nigeria later that year.
The charges were dismissed but he was then re-arrested in Dubai on a British warrant.
Ibori has been convicted in the UK before - in 1991 for stealing, in cahoots with his wife who worked as a cashier, from the Neasden, London, branch of the DIY shop Wickes.
He was also found guilty in 1992 for being in possession of a stolen credit card and having used it to fraudulently withdraw $1,590.
Nigeria is one of the world's biggest oil producers. Under its federal system, state governors enjoy huge powers and control budgets larger than those of many West African countries.
They have immunity from prosecution while in office.
Two other former state governors have been convicted of corruption charges in Nigeria, after fleeing the UK while free on bail.

The rise and fall of James Ibori

Posted by Terrobuster at 7:37 PM