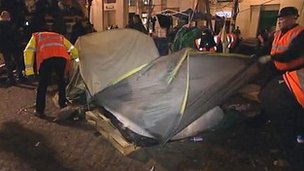 Bailiffs acting on a court order started to remove tents from outside St Paul's Cathedral
Police and bailiffs have moved in to remove protesters from the Occupy London camp at St Paul's Cathedral.
Bailiffs have removed tents and other equipment from the site. There have been no reports of trouble.
Occupy London was last week refused permission to appeal against a High Court decision to allow their eviction to proceed.
The City of London Corporation said it "regretted" that it had become necessary to evict the protesters.
Occupy London, which campaigns against corporate greed, set up the camp on 15 October.
BBC correspondent Jeremy Cooke at the scene said there was a makeshift wooden platform set up by the protesters.
These were being used in a stand-off with police by a small number of protesters.
The High Court decided that the City of London Corporation's move to evict the camp was "lawful and justified". 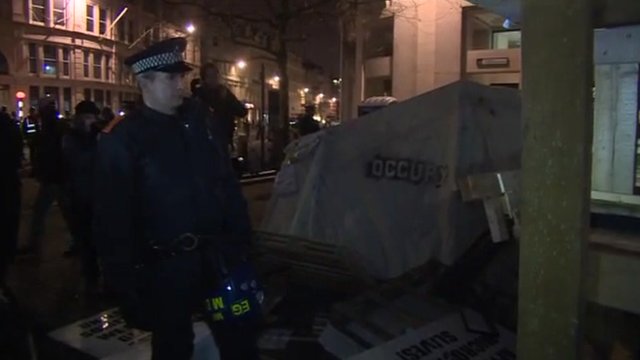 The BBC's Jeremy Cooke describes the scene as police and bailiffs move in to begin the eviction
The City of London Corporation was granted orders of possession and injunctions by the court.
The Court of Appeal's decision not to allow an appeal meant the corporation was free to clear the site.
The protesters insist they have a right to be at the site because the High Court orders refer only to the removal of tents and equipment.
George Barda, one of the five protesters who appealed against the High Court's decision, told the BBC he had "mixed emotions".
But he said: "It's not the beginning of the end, it's the end of the beginning.
"My personal concern is that we don't allow the drama of this event to eclipse the huge and important issues that we in this country and billions across the world are increasingly facing.
"And I have no doubt that as the economic situation gets worse in the coming years, more and more people will be joining this movement."
There was also an eviction of an Occupy campaign site, which campaigners say is a legally occupied squat, at Featherstone Street in Islington, north London. 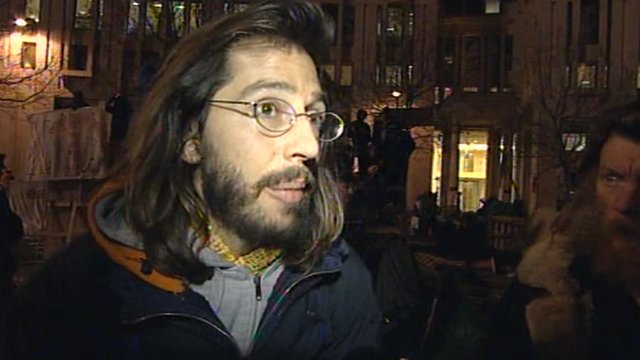 Posted by Terrobuster at 7:28 PM