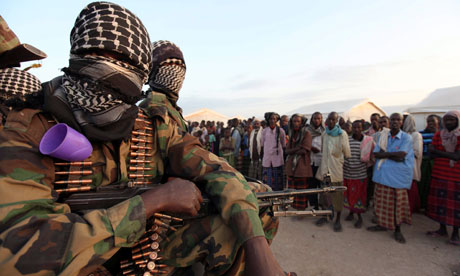 Members of the Islamist group al-Shabaab distribute aid near Mogadishu. Photograph: Feisal Omar/Reuters
They expect the oil to flow within weeks. Coming from two miles underground, the crude should reach the arid plains of Puntland in the north-east corner of Somalia by April.
Around the same time, Somali diplomats say an offensive against al-Shabaab militia in the south of the country, backed by US drone strikes, should have damaged the Islamist group's "effective fighting capability".
Meanwhile, the UN plans to impose trade sanctions on the illicit international trade in charcoal, Somalia's "black gold" which not only funds al-Shabaab but also destroys the country's forests and led in part to last year's widespread famine.
The promise of stability coupled with the apparent discovery of oil reserves could help to rebuild this poverty-stricken country. But experts warn the west must not pillage the newly found resources of Somalia, or risk massively escalating the conflicts already in the region. Kenyan, Ethiopian and Ugandan soldiers are in Somalia fighting al-Shabaab and each country has vested interests in Somalia's future. Already a new militia, led by the unlikely-sounding Sheik Atom, has formed around Puntland's oilfields.
The Somali prime minister, Abdiweli Mohamed Ali, speaking to the Observer after meeting Hillary Clinton and David Cameron at the London Somalia Conference last week, said that in the future a share of natural resources would be offered in return for help with reconstruction. "There's room for everybody when this country gets back on its feet and is ready for investment," he said. "Although now is not the time.
"What we need is capital from countries like the UK to invest. If the private sector can come in and do the work, then we welcome them."
But many observers are uneasy about foreign interference in a country still emerging from 21 years of civil war and facing political transition. The mandate for Somalia's transitional government runs out in August.
Chatham House analyst Adjoa Anyimadu said: "There's already a lot of scepticism from parts of the Somalian community about the reasons for the sudden focus on Somalia and the reasons behind the UK's interest.
"The potential for things to go wrong is high, for the population to feel they are being undermined or invaded by foreigners. Al-Shabaab has little credence with many Somalians but a foreign intervention could create a common enemy."
While a new wealth could bring back the diaspora, she said, they too would need to be wary about riding roughshod over respected clan structures. "There are big gulfs between the experiences of those educated abroad and those living in Somalia. Everyone has a duty to make sure the population really does get a say in establishing governance so that it is seen as legitimate. The pressing issue remains food and security."
Mark Bradbury, director of the Rift Valley Institute and author of several reports on Somalia, said oil was "a big game changer". He added: "The international community has been very quiet on the whole exploitation of minerals and hydrocarbons. There is clearly potential for dispute between the relatively stable Puntland and the rest of the country. The positive end would be a federal government put in place with international support; the negative, a Somalia being divided up by international military forces."
Markets expert Stuart Joyner, of Investec Securities in London, warned against the Somalis getting too carried away with the oil discoveries.
"Somalia obviously has oil potential because it's very close to some of the big east Africa finds and people are looking for more. It's a very poor country so it's going to help them, but in the global oil industry it's nowhere.
"I'd be flabbergasted if the Puntland fields were worth the time of the big players such as BP or Shell. It will be more private investors."
So the real corporate goal may well be not what is due to arrive on the surface next month but what is known to be under the Indian Ocean off Somalia's coast – where sovereignty is unclear.
Drilling in Puntland by the Canadian firm Africa Oil began last month and transitional government officials, in London for David Cameron's conference, said pipelines to the country's ports had been laid.
Civil war, insecurity and lack of infrastructure ensured that the region became a no-go for western companies from the early 1990s when the government collapsed, leaving local warlords and militias to claw out territories.
For Americans, Somalia still holds the painful memory of the "Black Hawk Down" incident of 1993 when 18 members of a US helicopter assault force and an estimated 700 Somalis were killed in a battle in Mogadishu. A senior Somali delegate in London last week said creating the conditions for stability was essential. "If citizens of Britain are kidnapped, then that will interfere with progress."
Dahabo Isse, from Mogadishu, and a prominent member of London's Somali community, is among those concerned at the prospect of western multinationals profiting from their resources. "If resources go to the people, then fine, but if they take most of the oil money outside it is a worry."

Posted by Terrobuster at 1:55 AM