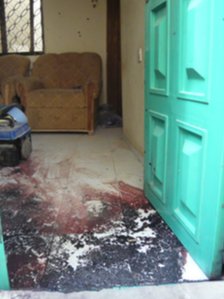 Bloodstains in the Kano house betray the residents' violent deaths
It was, by all accounts, a devastating dawn raid on a married couple in their suburban house in northern Kano, Nigeria.
The security force's bullets tore through the walls, leaving gaping holes an inch wide, and a car was shot to pieces.
Tiles outside the door of the bedroom - which had been turned upside down in what appeared to be a frantic search for evidence - were stained with blood.
It was part of a sweep by security forces in which 150 people were arrested in the northern city of Kano.
It came three days after the 20 January string of bombings by the militant Islamist group Boko Haram killed at least 185 people - mostly civilians.
'Decent man' One woman, who said she had raised the man killed in the attack from birth, is inconsolable.
"Alhaji was a decent man all his life. We always praised his attitude. We're all in shock," she told the BBC, as she wept heavily.
"I will never forgive those who killed him. I can't forgive them."
The disappearance of the Muslim man, a fabric seller in the local market, and his pregnant wife, has caused fury amongst the local community.
"The man is good, I never heard anything bad about him. I am afraid," local resident Ali Muhammed Kamil told me, as his voice trembled.
"I am begging the military, or the Nigerian government, in the name of Allah, that they should not be killing people anyhow. If they suspect something, they're supposed to use their intelligence to arrest him, interview him and find out who he is.
"They should not be killing people like this - they can sue him [in] court," he added.
Identity question 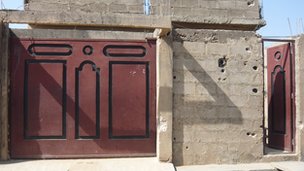 The front gate of the house bears no sign of forced entry
As I left the raided house through the bullet-ridden gate, I saw it was still intact, suggesting there had been no forced entry.
I did spot a few holes made by bullets fired from inside the compound, but it was unclear where they came from and when.
The security services have let it be known privately that those targeted were Boko Haram supporters.
The group wants a strict form of Islamic law adopted in the whole of Nigeria, not just the dozen northern states already using it.
They also want captured members released and for Christians to leave Nigeria's mainly Muslim north.
But it is not clear who they actually are, which makes them difficult to trace.
The national federal authorities are yet to officially account for what happened in the raided house.
Local state officials said they are powerless to ensure justice in such situations, once federal security forces are mobilised.
"No, you see, it's not [for] me to determine that," Kano state Governor Rabiu Musa Kwankwaso told me.
"It's the responsibility of the security agencies, the judges and lawyers, to put their heads together, to look at the constitution of the federal republic of Nigeria. Also to look at the laws of the land, be it state, federal or whatever laws, to ensure that those who are detained are detained for a just reason."
Crackdown

Violence never solves anything. Invariably it has to be sorted out through dialogue and through normal, good old police work”

Abbas Dalhatu Freedom Radio
Continue reading the main story
Rights groups worry that the national government's track record is not good.
Amnesty International told the BBC that suspected members of Boko Haram have been subjected to extra-judicial execution and enforced disappearance.
Worryingly for the authorities, Boko Haram has now successfully extended its area of operations beyond its traditional stronghold in the state of Borno in north-eastern Nigeria.
Borno, and its capital Maiduguri, is still the focus of much of the crackdown. Recently 11 members were killed by the police in disputed circumstances.
The police said it was during a gunfight as they conducted a search operation. Boko Haram claimed their members were picked up as they slept.
While incidents like these are not uncommon in the north-east, they are in Kano - the country's second biggest city.
"Violence never solves anything," Abbas Dalhatu, executive director of Kano independent broadcaster Freedom Radio, told me.
"Invariably it has to be sorted out through dialogue and through normal, good old police work."
Persecution risk
Mr Dalhatu's radio station has been chasing the military for an explanation of what happened in the raided house for over a week.
He fears the lawlessness of the north-east, like in Maiduguri - a Boko Haram stronghold - is spreading south to Kano.
"There is every indication that Maiduguri is turning into a ghost town. A state of emergency has been declared and the security agencies are able to do a lot of the things without the constitutional checks and balances.
"It would be really unfortunate if it degenerates into that in our own local environment."
Worse, perhaps, is the feeling of persecution such actions allow to fester within the Muslim community.
After holding funeral prayers for her disappeared son - in the absence of a corpse - the bereft woman revealed something else to me about Alhaji.
"My son was a bearded man and very religious. He was a man of principle, well-versed in the Holy Koran. His only crime was having a long beard," she said.
"But that didn't make him Boko Haram."
There is a growing fear that security forces do not appear to be differentiating between devout Muslims and those who choose to use violent means to further their political goals.
Without addressing those concerns, the government could find its tactics backfire in its quest to rid itself of Boko Haram.

Posted by Terrobuster at 8:31 PM