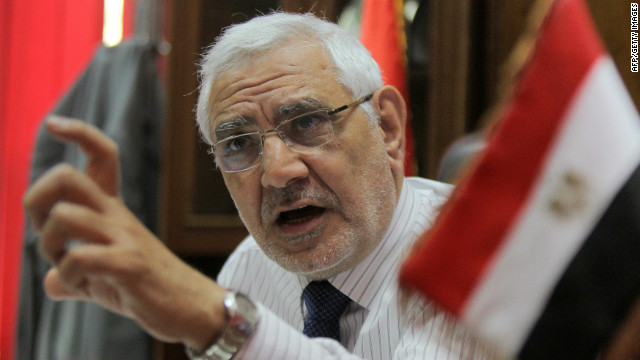 Egyptian presidential candidate Abdel Moneim Aboul Fotouh was carjacked and beaten by masked gunmen.
STORY HIGHLIGHTS
Cairo (CNN) -- Egypt's first presidential election since the ouster last year of Hosni Mubarak will take place on May 23-24, with final results expected June 21, the head of the election commission announced Wednesday.
Under that schedule, the outcome would be announced 10 days before the ruling military council, the Supreme Council of the Armed Forces, has said it will hand over authority to an elected government.
Farouk Sultan, the election commission head, told a nationally televised news conference that candidates can register for the presidential election from March 10 until April 8, with three weeks of campaigning commencing on April 30.
Candidates must have 30,000 supporters from 15 cities in Egypt in order to qualify, Sultan said.
Egyptians living abroad will be able to vote from May 11 to May 17, and if a runoff is necessary, it would take place June 16-17, he said.
No formal international monitoring will occur, according to Sultan, who said the military and police will provide security and the commission will "ensure the transparency of the elections."
The electoral activity takes place a year after popular revolts erupted, eventually leading to Mubarak's downfall in February of 2011. The longtime dictator is on trial on charges of corruption and ordering the deaths of hundreds of protesters.
The military council has led Egypt's government since Mubarak's ouster. However, the transition has not been quick or transparent enough for some Egyptians.
A series of protests in Cairo last month resulted in violent and sometimes deadly clashes between demonstrators and soldiers.
In January, two Islamist parties won about 70% of the seats in the lower house of parliament in the first elections for an elected governing body in the post-Mubarak era.
The Muslim Brotherhood's Freedom and Justice Party won 235 seats and the conservative Al Nour party gained 121 seats in the People's Assembly, according to final results.
The assembly consists of 498 elected members, and the rest were divided among other parties. Ten other members chosen by the country's military rulers, the Supreme Council of the Armed Forces include five people of the Coptic Christian faith, a minority group that has faced attacks and is fearful of Islamism.
Last week, the Muslim Brotherhood party also won a majority in the upper house of parliament, the Shura Council.
The full parliament is expected to meet Saturday to appoint a 100-member panel to write a new Egyptian constitution.
Some Egyptians already have said they plan to run for president, including Amre Moussa, a foreign minister under Mubarak who headed the Arab League until June 2011.
Last week, Abdel Moneim Aboul Fotouh, a former member of the Muslim Brotherhood who announced his candidacy last year, was carjacked and beaten as he was returning from a conference, his campaign manager said.
He was hospitalized after the attack, according to Ali Behnasawy, the campaign manager.
Posted by Terrobuster at 8:49 PM