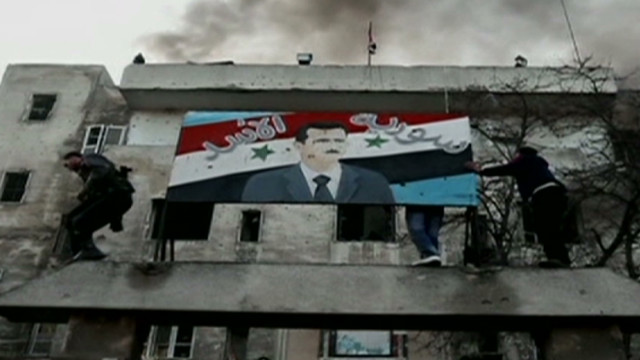 On the front lines of Homs battle
STORY HIGHLIGHTS
Are you there? Send us your images or video
(CNN) -- In what the government touts as a move toward reform, Syria's constitutional referendum kicked off Sunday to widespread skepticism that the regime would stop slaughtering civilians.
The referendum on a draft constitution began in polling centers across the country Sunday morning, Syrian state-run TV reported.
But the unabated violence on the ground indicated nothing has changed in the nearly year-long onslaught by government forces.
At least 100 people were killed on the eve of the vote, almost half of them in Homs, according to the Local Coordination Committees of Syria, a network of opposition activists.
And on Sunday morning, rockets fell once again on the besieged Baba Amr neighborhood of Homs, said the Syrian Observatory for Human Rights, another opposition activist group
Analysts and protesters ridicule the constitutional referendum as window dressing, the latest in a series of superficial measures intended to pacify the president's critics.
Among the changes in the draft constitution is an article that states "the law shall regulate the provisions and procedures related to the formation of political parties."
"Carrying out any political activity or forming any political parties or groupings on the basis of religious, sectarian, tribal, regional, class-based, professional, or on discrimination based on gender, origin, race or color may not be undertaken," it continues.
The language suggests government permission is needed to form a party and excludes a number of people and groups from political activity, said Andrew Tabler, Syria expert at the Washington Institute for Near East Policy.
"It's not going to change the fact that it's a minority-dominated situation," he said. "It will remain a presidential system with powers vested in the hands of the president."
Tabler said President Bashar al-Assad is using this "tactic to get people to leave the streets."
But former Syrian lawmaker George Jabbour said "clause 8 of the new draft of the constitution is the essential point" of the document. It "allows a multi-party system as opposed to the Baath Party being the leading party of the society and the state as stipulated in the current constitution."
The Baath Party rules Syria.
Jabbour said "special committees will be formed to look into the licensing of new parties in line with the new constitution."
As for presidential elections, they "will be competitive since there is no leading party anymore, and all the parties' candidates are eligible provided their candidacy is endorsed by at least 35 members of parliament," Jabbour said.
But reports of attempted vote fixing have already emerged.
According to Lt. Col. Mohamed Hamado of the opposition Free Syrian Army, civilians say that government authorities are pressuring them to vote for the referendum.
Amid the promises of change, the humanitarian crisis mounts.
On Saturday, the Red Cross failed to reach a deal with Syrian authorities and opposition members for a break in fighting so wounded people could be evacuated from Homs, an agency spokesman said.
"There has been no evacuation from Homs (Saturday). We simply could not reach any kind of agreement," International Committee of the Red Cross spokesman Saleh Dabbakeh said from Damascus.
He said the ICRC will continue trying to negotiate for access.
The ICRC has urged combatants to stop fighting for two hours each day to deliver humanitarian aid to Homs and other cities.
Opposition activists say relentless shelling and sniper fire have paralyzed Homs for more than three weeks. In addition to mounting carnage in the streets, residents report scarce or nonexistent access to food, water, electricity and medical care.
Among those killed was 17-year-old Anas al-Tarsheh, an opposition videographer who primarily documented the shelling of the Sunni-dominated Homs neighborhood of Inshaat, the LCC said.
CNN and other media outlets cannot independently verify opposition or government reports because Syria has severely limited access to the country by foreign journalists.
But the vast majority of reports from the ground indicate government forces are massacring citizens in an attempt to wipe out dissidents seeking an end to al-Assad's rule.