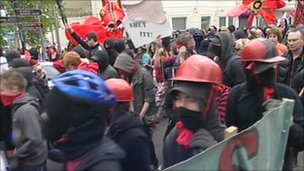 
Demonstrators have turned out in Brighton for a pre-May Day "street party and protest".
Under the banner Brighton Mayday collective, about 150 people have gathered in Ship Street, Sussex Police said. One person has been arrested.
Before the event, officers had called on the organisers to come forward and speak to them.
A similar May Day protest in the city two years ago led to a series of clashes between police and protesters.
Sussex Police said one person had been arrested in connection with "serious disorder" during a demonstration in central London last month.
'Resist oppression' The protesters announced the location at 1130 BST of the start of the protest on social networking sites.
They first gathered near the West Pier on the seafront and made their way through Middle Street towards Ship Street.
In a press release, the organisers said the event brought together local groups including Brighton Anarchist Black Cross, Smash EDO, Squatter Networks of Brighton and Brighton Hunt Saboteurs.
It said May Day was a time to "stand up for workers' rights and resist oppression".
Sussex Police said the force could not advise which areas of the city to avoid but it did anticipate disruption.
On Thursday, Ch Supt Graham Bartlett said without contact with the protesters, policing the event would be harder.

Posted by Terrobuster at 6:07 AM