State of emergency declared in storm-hit US South 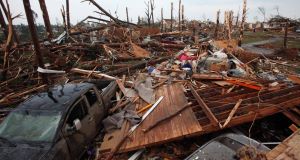 28/04/2011 - 07:09:28
US President Barack Obama declared an emergency today after a wave of tornado-spawning storms tore through the South, splintering buildings and killing more than 70 people in four states.

The storms have swept across Alabama, killing at least 58 people.

In a statement released today Mr Obama said he had spoken to Alabama governor Robert Bentley and approved his request for emergency assistance, including search and rescue teams.

The president and first lady Michelle Obama offered condolences to families affected by the storms and commended “the heroic efforts of those who have been working tirelessly to respond to this disaster”.

More than 70 people in four states have been killed by the storms, including at least 15 in Tuscaloosa, home of the University of Alabama.

The mayor said sections of the city had been destroyed and the infrastructure devastated.

Eleven deaths were reported in Mississippi, two in Georgia and one in Tennessee.

News footage showed paramedics lifting a child out of a flattened Tuscaloosa home, with many neighbouring buildings in the city of more than 83,000 also reduced to rubble. A hospital there said its casualty unit had admitted at least 100 people.

“What we faced today was massive damage on a scale we have not seen in Tuscaloosa in quite some time,” mayor Walter Maddox said, adding that he expected the death toll to rise.

The storm system spread destruction on Tuesday and yesterday from Texas to Georgia, and it was forecast to hit the Carolinas next and then move further north east.

Around Tuscaloosa, traffic was gridlocked last night by downed trees and power lines. University chiefs said there did not appear to be significant damage on campus and it was using its student recreation centre as a shelter.

Mr Maddox said authorities were having trouble communicating, and 1,400 National Guard soldiers were being deployed around the state.

Brian Sanders, the manager of an oil change shop, brought his daughters to DCH Regional Medical Centre because he felt they would be safe there. He said his business had been levelled.
“I can’t believe we walked away,” he said.

Storms struck Birmingham earlier in the day, felling numerous trees that impeded emergency crews and those trying to leave hard-hit areas. Surrounding Jefferson County reported 11 deaths by early today and another hard-hit area was Walker County with eight deaths. The rest of the deaths were scattered around the state, emergency officials said.

In Huntsville, meteorologists found themselves in the path of tornado and had to evacuate the National Weather Service office.

In Mississippi, a Louisiana police officer was killed when a towering sweetgum tree fell on to his tent as he shielded his young daughter with his body, said Kim Korthuis, a supervisor with the National Park Service. The girl was unhurt.

Also in Mississippi, a man was crushed in his mobile home when a tree fell during the storm, a lorry driver died after hitting a downed tree on a state highway and a member of a county road crew was killed when he was struck by a tree they were removing.

By early today the death toll had increased to 11 for the day, said Mississippi Emergency Management Association spokesman Jeff Rent. The governor also made an emergency declaration for much of the state.

Storms also killed two people in Georgia and one in Tennessee yesterday.

In eastern Tennessee, a woman was killed by falling trees in her trailer in Chattanooga. Just outside the city in Tiftonia, what appeared to be a tornado also struck at the base of the tourist peak Lookout Mountain.

Tops were snapped off trees and insulation and metal roof panels littered the ground. Police officers walked down the street, spray-painting symbols on houses they had checked for people who might be inside.
Read more: http://www.breakingnews.ie/world/state-of-emergency-declared-in-storm-hit-us-south-502937.html#ixzz1Ko4FIC4l
Posted by Terrobuster at 1:59 AM