Ugandan opposition leader is in Kenya for medical treatment 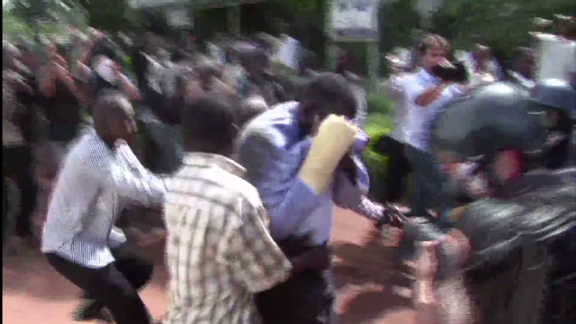 Uganda's Besigye arrested
STORY HIGHLIGHTS
Nairobi, Kenya (CNN) -- Ugandan opposition leader Kizza Besigye remained at a private hospital here on Saturday for treatment and observation following his arrest earlier this week, his sister said.
Besigye's sister, a medical doctor in Uganda, said her brother has suffered from temporary blindness and serious bruising since his arrest in Uganda on Thursday. She spoke to CNN by phone from Uganda's capital city of Kampala.
"He has had several tests," said Olive Kobusingye, "to test the toxicology of the substance that police sprayed in his eyes."
An assistant to Besigye said the opposition leader is in serious condition and that his doctors have deemed him "too weak" to talk to anyone. He will be kept in observation for at least another night, said the assistant in Nairobi.
CNN could not independently confirm the reports of Besigye's health.
Meanwhile, Ugandan President Yoweri Museveni was also in Nairobi on Saturday, addressing a popular private business forum.
He spoke just one day after hundreds of angry protesters faced off with security police in the streets of Kampala. At least four people were killed and 120 injured, according to the Ugandan minister of internal affairs.
Rioters were angry at the government and upset over Besigye's latest arrest.
Besigye has been arrested several times this month.
After his fourth arrest on Wednesday, he was released on bail and ordered by the court not to protest for seven months. Defying orders, Besigye hit the streets again Thursday, where men in civilian clothing smashed his car and sprayed him in the face with pepper spray before loading him into a police car.
"Apparently it was after that opposition leader who sprayed the police with that pepper spray first," said Museveni. "I think the lenses of CNN didn't see very well. It was that leader who did that first."
Journalists working for CNN on the scene and videos of the arrest report no attack on the police prior to Besigye's arrest.
Responding to opposition claims that several demonstrators have been killed by police using live ammunition, Museveni said that their deaths will be "investigated."
"This will not escalate. We will defeat them," he said about protesters. "My democracy is a democracy with discipline."