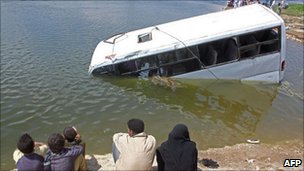 There were differing reports as to how the accident occurred


A minibus carrying some 32 mourners to a funeral fell off a ferry on the River Nile in Egypt, killing at least 17 people, officials say. Ten of the passengers survived, but five people are still missing, after the accident in Beni Suef region, they said.
The state news agency had put the death toll at 43, but then revised it to 22.
Transport accidents are common in Egypt, often blamed on poor maintenance and a lack of regulation.
A security official told the Associated Press that the minibus had slid off the ferry because the emergency brake was not on.
Another report said the bus fell off the ferry after it crashed into the shore.
Rescuers were sent to the scene, some 70 miles (110km) south of Cairo.