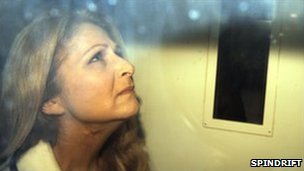 
A mother who admitted killing her three young children at their Edinburgh home has been jailed for 16 years.
Theresa Riggi, 47, had pleaded guilty to a charge of culpable homicide on the grounds of diminished responsibility. She was originally charged with murder.
Her eight-year-old twins Austin and Gianluca and their five-year-old sister Cecilia were found dead at their flat in Slateford Road on 4 August 2010.
They were found with stab wounds after a suspected gas explosion at the flat.
The family had moved to Edinburgh from Skene in Aberdeenshire following the break-up of her marriage to the children's father, Pasquale Riggi.
In a statement, read out by a spokesman from Victim Support Scotland outside the High court in Glasgow, Mr Riggi said: "The horrific manner in which my children died will leave an indelible mark on the rest of my life. As a father, my natural instincts were geared towards safeguarding my children from the dangers of this world. 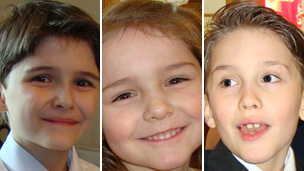 Luke, Cecilia and Austin Riggi were killed by their mother
"It pains me to the core that I was unable to protect them from the selfish, brutal and murderous act that ended their lives so unfairly.
"There is no justification for this heinous crime, repeated three times, nor is there any sentence that can provide justice for the overwhelming loss of three lives and the subsequent painful grief and devastation caused to surviving family and friends."
Passing sentence at the High Court in Glasgow, Lord Bracadale said: "The result of these acts is a devastating family tragedy. The father of the children, Pasquale Riggi, and the wider family have been left utterly bereft by the loss of the children.
"And you, who had a genuine but abnormal and possessive love of your children, have lost them and are brought to this sorry pass."
He said that while Riggi's responsibility had been diminished, she was still responsible for her actions.
"The effect of the diminished responsibility is to reduce these crimes from what would have been exceptionally wicked crimes of murder to what are still very serious crimes of culpable homicide," he said. 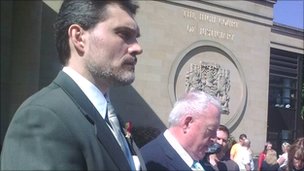 Pasquale Riggi said there was no justification for such a heinous crime
"The number and nature of the stab wounds to each child is indicative of a truly disturbing degree of violence which, in order to bring about the deaths of three children, must have been sustained over a significant period of time. It is difficult to envisage the physical commission of such acts."
He added they were "ghastly and grotesque acts".
He sentenced her to 18 years in prison but reduced it by two years due to her early plea. The sentence will be backdated to August last year.
He recommended Riggi be deported at the end of her sentence.
Last month, the High Court in Edinburgh heard California-born Riggi had been a protective mother who was involved in a custody battle with her estranged husband over access to the children.
Phone call The couple had spoken on the telephone 48 hours before the children were found dead.
During that conversation Riggi asked her husband if he was going to take the children away, to which he replied that she had left him no choice.
Riggi replied: "Say goodbye then" and then hung up the phone. 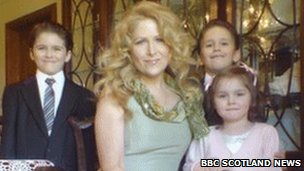 Theresa Riggi killed Cecilia and her brothers Luke and Austin
The court heard how the violinist stabbed each of her children eight times.
Witnesses said they saw Riggi on the second-floor balcony "screaming loudly" before climbing on to the railings. She then intentionally fell head-first from the balcony.
Defence QC Donald Findlay told the court that Riggi had been under a huge amount of stress at the time of the killings and suffered from a collection of personality disorders.
He said she was "wholly devoted" to her children and feared they would be taken away from her.
Mr Findlay said: "However irrational and however insane, that was the world as Theresa Riggi saw it.
"Killing them was the last gift she could give them."
Det Supt Allan Jones, of Lothian and Borders Police, said: "This has been a very sad case in which the lives of three beautiful young children were cut tragically short.
"Mr Riggi, who lost his loved ones through their untimely death, and his family and friends are very much in our thoughts.
"It was a difficult inquiry for everyone involved and I would like to commend the professionalism of all those who worked on it."