Tourist rewarded for saving baby from US balcony fall 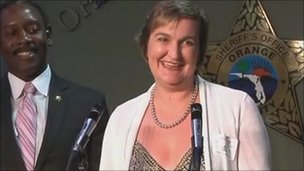 A British tourist who caught a toddler who had fallen from the top of a four-storey Florida hotel has been given an award for her quick thinking.
Helen Beard saw Jah-Nea Myles hanging from a balcony railing at Orlando's Econo Lodge hotel and ran underneath to break the 16-month-old's fall.
Ms Beard, 44, from Worksop, Nottinghamshire, said: "It felt like something anyone would have done."
She was presented with the Orange County Sheriff Office's Medal of Merit.
She told reporters she did not remember catching the child, but did remember seeing her fall.
Ms Beard said: "I'm really honoured to have been recognised in this way.
'Guardian angel' "It all feels a little bit intimidating to say the least but I'm very grateful."
At a special ceremony, Orange County Sheriff Jerry Demings told Ms Beard she had saved a child's life, saying: "Your immediate actions and response were heroic."
John Cooper, an administrator with the Department of Children and Families added: "Thank you that you are a living, breathing guardian angel."
After the fall Jah-Nea was taken to hospital, where medical staff said they saw no bruises or scratches and deemed her in good health.
The baby's mother Helena Myles, 20, told investigators that she had left her daughter in the care of the friends, who said they did not notice the youngster slip out of their room, according to the Orange County Sheriff's incident report.