Why attack Libya and not Syria? 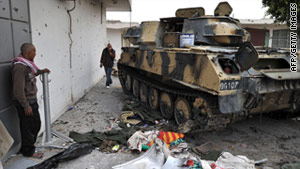 Libyans in the besieged city of Misrata walk past a tank that belong to the forces of Col. Moammar Gadhafi. The U.S. and its allies have imposed a no-fly zone over Libya.

STORY HIGHLIGHTS
(CNN) -- Two countries, two cases of extreme violence committed against citizens by their own government.
In one case, the Obama administration responds with military force. In the other, it doesn't.
Why?
The question has been raised in response to the radically different U.S. reactions to the bloodshed in Libya and Syria. More than 400 people have been killed in Syria over the past several weeks as Damascus has cracked down on protesters seeking reform, according to the Syrian Human Rights Information Link, a prominent human rights group.
Why Syria is different for the U.S.

The United Nations says it has information that 76 people were killed in that country last Friday alone, apparently during peaceful marches. President Bashar al-Assad's regime has described the protesters as "armed criminal groups," and shows no sign of letting up.
President Barack Obama has condemned the violence "in the strongest possible terms" and is seeking ways to "increase the pressure on the regime ... in a targeted way," according to White House Press Secretary Jay Carney. So far, however, the response has amounted to little more than talk.
Rights group: More than 400 killed in Syria

Over in Libya, however, the U.S. reaction was entirely different when strongman Moammar Gadhafi promised to show "no mercy" to residents of the rebel-held city of Benghazi. Washington worked furiously behind the scenes at the United Nations to win an international mandate for a naval blockade, a no-fly zone and a license to take military action to protect civilians.
Obama promised no use of ground troops, but U.S. air power was used to devastating effect against elements of Gadhafi's forces before control of the operation was handed over to NATO commanders.
The White House says the two situations can't be compared.

Libya was "a unique situation," Carney told reporters Monday. "We had large portions of the country that were out of the control of Moammar Gadhafi (and) we had an international consensus to act. We had the support of the Arab League to act in a multilateral fashion."
But Washington is "pursuing a range of possible policy options" in Syria, he stressed. The administration is looking at "targeted sanctions to respond to the crackdown ... and to make clear that this behavior is unacceptable."
American "values and principles apply to all countries," Defense Secretary Robert Gates added Tuesday. "Our response in each country will have to be tailored to that country, and the circumstances peculiar to that country."
Part of the reason the Obama administration intervened militarily in Libya and not Syria is because "Libya happened first," noted Danielle Pletka, vice president for foreign and defense policy studies at the American Enterprise Institute, a conservative Washington think tank. "So the international community responded there first."
Protests in Benghazi first broke out in mid-February. Protests in the Syrian city of Daraa started last month after a violent crackdown by security forces on peaceful demonstrators protesting the arrests of youths who scribbled anti-government graffiti.
Witnesses describe fighting in Misrata

Second, there is "nowhere near the consensus on Syria as there is on Libya," Pletka told CNN. Syria, as opposed to Libya, stands at the heart of the Arab world. Assad has more friends and allies to call on.
"Assad is a dictator, a sponsor of terrorism, (and) a thug," Pletka said. "You could argue he's worse than Gadhafi." But "on Syria, the Arab League is not going to be nearly as forward-leaning. (They're) much closer to Assad."
Among other things, Gadhafi has been accused of trying to have then-Saudi Crown Prince Abdullah assassinated in 2003. There's a "personal antipathy" factor between Gadhafi and other Arab leaders, Pletka said.
At the same time, Israel may have a hostile relationship with its neighbor, but the Israeli leadership is "very comfortable with the devil it knows" in Damascus.
Obama, Pletka said, has shown an extreme reluctance to engage in unilateral military action. Ousting Assad would change the entire political dynamic in the Middle East to the benefit of the United States, she said, noting Syria's close ties to Iran and organizations such as Hezbollah, Hamas and Islamic Jihad. But unless and until a firmer international consensus emerges, more concerted action is unlikely.
Military action in Libya may also have became a priority partly due to fears of al Qaeda, according to Rick Nelson, a terrorism expert at the Center for Strategic and International Studies, another Washington think tank.
Al Qaeda is "good at using countries in chaos to carve out safe havens," Nelson said, noting that the second-highest number of foreign fighters for al Qaeda in Iraq came from Libya. As Libya became more unstable, it may have become a priority for Western powers to ensure the country doesn't become more of a home for al Qaeda leaders.
Nelson echoed Pletka's point about the lack of an international consensus on Syria.

"People don't want to be on Assad's bad side," he said. If you attack Syria, "you're crossing a line that is changing the whole strategic calculus in the region in one move," he said. "The stakes are a lot higher."
CNN's Josh Levs and Joe Sterling contributed to this report.
RELATED TOPICS
Posted by Terrobuster at 12:07 PM