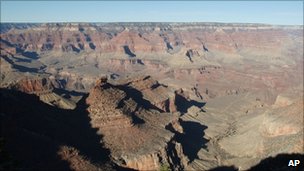 The Grand Canyon is one of the most popular tourist destinations in the US
A man survived a 200ft (61m) drop in the US state of Arizona after apparently driving his car off the South Rim of the Grand Canyon, authorities have said.
The 21-year-old told park rangers he freed himself from the car after the accidental crash on Monday and climbed to the rim of the canyon to seek help.
The driver was treated for non-life threatening injuries, officials said.
The National Park Service is conducting an investigation into the incident.
On Monday evening, rangers were phoned by a visitor to the park, who claimed he had been flagged down by an injured man who had driven over the edge of the canyon.
The accident reportedly took place at about 1945 local time (0245 GMT) on Monday.
Park rangers later found a vehicle lodged against a tree roughly 200ft below the canyon's South Rim. There was another precipice about 10ft beyond the tree, a National Park spokeswoman said.
Officials said on Wednesday they were making plans to remove the car.
The Grand Canyon is one of the most popular US tourist destinations and is visited by 4.5m people per year.