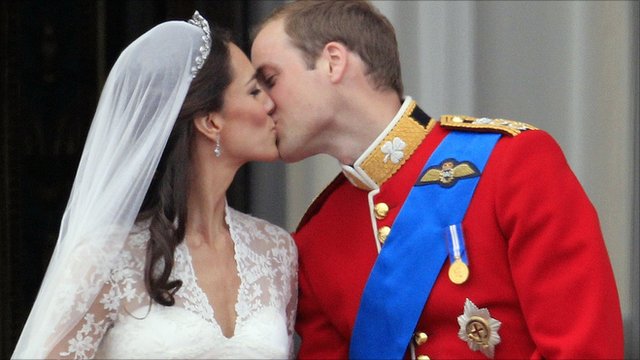 
Prince William and Kate Middleton have kissed twice on the balcony of Buckingham Palace after their wedding service in Westminster Abbey.
They were cheered by 500,000 well-wishers who gathered outside the palace, as RAF planes flew past in honour of the new royal couple.
Police estimate a million people lined the procession route from the abbey to the palace.
The bride will now be Her Royal Highness the Duchess of Cambridge.
Prince William drove his new bride back to Clarence House, following a buffet reception at Buckingham Palace, in Prince Charles's classic blue Aston Martin, decked in ribbons and balloons with "Just Wed" on the number plate.
They will return to the palace for evening celebrations later. 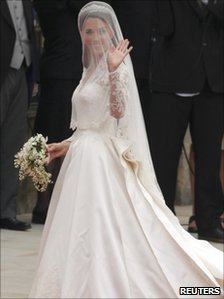 The dress was designed by Sarah Burton
The church service, watched by 1,900 guests, ran smoothly but the prince did struggle to place the wedding ring on the duchess's finger.
Following a long tradition, the ring has been fashioned from Welsh gold given to Prince William by the Queen.
After the couple said their vows, in which she did not promise to obey William, the Archbishop of Canterbury, the Most Reverend Rowan Williams, declared: "I pronounce that they be man and wife together, in the name of the Father, and of the Son, and of the Holy Ghost. Amen."
They spent a private moment together with their families, as they signed the marriage register.
Prince William has been given the title of the Duke of Cambridge by the Queen, and Miss Middleton has become Her Royal Highness the Duchess of Cambridge on their marriage.
The duchess, who managed to keep her wedding dress a secret, wore an ivory and lace gown by Sarah Burton at Alexander McQueen. The prince wore the red tunic of an Irish Guards colonel - his most senior honorary appointment.

Sarah Bell BBC News, in central London
The excitement, which had been building throughout the morning, peaked at about 1330 BST when the prince kissed his new bride.
The crowd, decked in union jacks, tiaras, and fascinators, reacted with deafening cheers and demands for more.
Much neck-craning was required for the best view of the spectacle, which was obscured by a sea of cameras, periscopes and flags.
Some people had tears in their eyes as they watched the fly-past, with "amazing" a common response when asked about the day's events.
As one American spectator put it, "No-one does pageantry like the British - you can't help being infected by the energy and emotion."
Continue reading the main story
Among guests at Westminster Abbey were singer-songwriter Sir Elton John and his partner David Furnish, former England rugby coach Sir Clive Woodward, and former England football captain David Beckham and his wife Victoria.
Actor Rowan Atkinson, a close friend of Prince Charles, Prince Harry's friend Chelsy Davy and film director Guy Ritchie were also there.
UK Prime Minister David Cameron and his wife Samantha, Australian prime minister Julia Gillard and former British PM Sir John Major were among the politicians present.
For those lining the route, large speakers broadcast the wedding service, and hundreds of millions of people were estimated to watch the proceedings worldwide on television.
Royal officials said the couple were involved in planning their wedding day, from the music at the ceremony to the flowers and the cake.
Inside Westminster Abbey, an avenue of trees lined the red carpet leading up to the altar.
The bride walked up the aisle to coronation anthem I Was Glad, by Sir Charles Hubert Hastings Parry, from Psalm 122. Her brother James Middleton gave the Lesson, reading Romans 12: 1-2, 9-18. 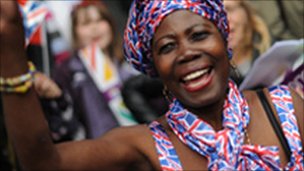 Classical compositions by Elgar, Britten and Vaughan Williams featured during the ceremony, alongside the hymn Jerusalem and the English melody Greensleeves.
There was a canape reception for 650 guests at Buckingham Palace. About 300 close friends and relatives will stay on for a formal black tie dinner and disco in the evening, hosted by Prince Charles.
But the Queen and the Duke of Edinburgh left for a weekend away after hosting the lunchtime reception and will miss Prince Harry's best man speech and Michael Middleton's father of the bride address.
Despite predictions of showers, it stayed dry for the royal couple. Temperatures in London reached around 18C (64.4F) at 2pm.